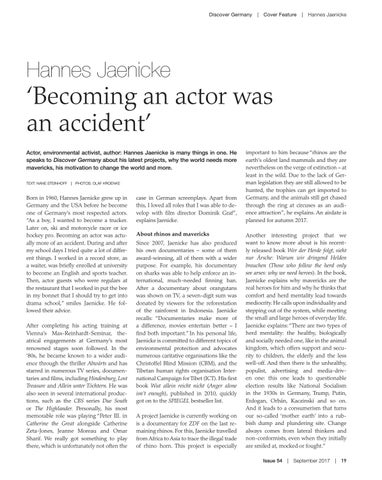 ‘Becoming an actor was an accident’ Actor, environmental activist, author: Hannes Jaenicke is many things in one. He speaks to Discover Germany about his latest projects, why the world needs more mavericks, his motivation to change the world and more. TEXT: NANE STEINHOFF  |  PHOTOS: OLAF KROENKE

Born in 1960, Hannes Jaenicke grew up in Germany and the USA before he become one of Germany’s most respected actors. “As a boy, I wanted to become a trucker. Later on, ski and motorcycle racer or ice hockey pro. Becoming an actor was actually more of an accident. During and after my school days I tried quite a lot of different things. I worked in a record store, as a waiter, was briefly enrolled at university to become an English and sports teacher. Then, actor guests who were regulars at the restaurant that I worked in put the bee in my bonnet that I should try to get into drama school,” smiles Jaenicke. He followed their advice. After completing his acting training at Vienna’s Max-Reinhardt-Seminar, theatrical engagements at Germany’s most renowned stages soon followed. In the ‘80s, he became known to a wider audience through the thriller Abwärts and has starred in numerous TV series, documentaries and films, including Hindenburg, Lost Treasure and Allein unter Töchtern. He was also seen in several international productions, such as the CBS series Due South or The Highlander. Personally, his most memorable role was playing “Peter III. in Catherine the Great alongside Catherine Zeta-Jones, Jeanne Moreau and Omar Sharif. We really got something to play there, which is unfortunately not often the

case in German screenplays. Apart from this, I loved all roles that I was able to develop with film director Dominik Graf”, explains Jaenicke. About rhinos and mavericks Since 2007, Jaenicke has also produced his own documentaries – some of them award-winning, all of them with a wider purpose. For example, his documentary on sharks was able to help enforce an international, much-needed finning ban. After a documentary about orangutans was shown on TV, a seven-digit sum was donated by viewers for the reforestation of the rainforest in Indonesia. Jaenicke recalls: “Documentaries make more of a difference, movies entertain better – I find both important.” In his personal life, Jaenicke is committed to different topics of environmental protection and advocates numerous caritative organisations like the Christoffel Blind Mission (CBM), and the Tibetan human rights organisation International Campaign for Tibet (ICT). His first book Wut allein reicht nicht (Anger alone isn’t enough), published in 2010, quickly got on to the SPIEGEL bestseller list. A project Jaenicke is currently working on is a documentary for ZDF on the last remaining rhinos. For this, Jaenicke travelled from Africa to Asia to trace the illegal trade of rhino horn. This project is especially

important to him because “rhinos are the earth’s oldest land mammals and they are nevertheless on the verge of extinction – at least in the wild. Due to the lack of German legislation they are still allowed to be hunted, the trophies can get imported to Germany, and the animals still get chased through the ring at circuses as an audience attraction”, he explains. An airdate is planned for autumn 2017. Another interesting project that we want to know more about is his recently released book Wer der Herde folgt, sieht nur Ärsche: Warum wir dringend Helden brauchen (Those who follow the herd only see arses: why we need heroes). In the book, Jaenicke explains why mavericks are the real heroes for him and why he thinks that comfort and herd mentality lead towards mediocrity. He calls upon individuality and stepping out of the system, while meeting the small and large heroes of everyday life. Jaenicke explains: “There are two types of herd mentality: the healthy, biologically and socially needed one, like in the animal kingdom, which offers support and security to children, the elderly and the less well-off. And then there is the unhealthy, populist, advertising and media-driven one: this one leads to questionable election results like National Socialism in the 1930s in Germany, Trump, Putin, Erdogan, Orbán, Kaczinski and so on. And it leads to a consumerism that turns our so-called ‘mother earth’ into a rubbish dump and plundering site. Change always comes from lateral thinkers and non-conformists, even when they initially are smiled at, mocked or fought.” Issue 54  |  September 2017  |  19