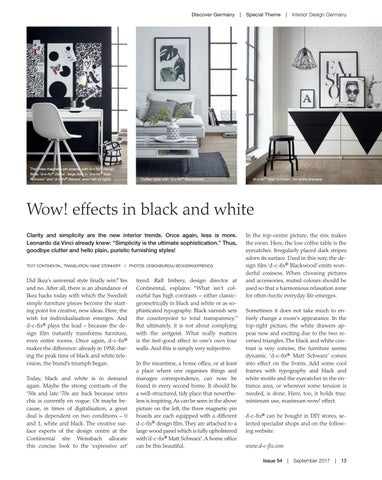 Did Ikea’s universal style finally win? Yes and no. After all, there is an abundance of Ikea hacks today with which the Swedish simple furniture pieces become the starting point for creative, new ideas. Here, the wish for individualisation emerges. And d-c-fix® plays the lead – because the design film instantly transforms furniture, even entire rooms. Once again, d-c-fix® makes the difference: already in 1958, during the peak time of black and white television, the brand’s triumph began. Today, black and white is in demand again. Maybe the strong contrasts of the ‘50s and late ‘70s are back because retro chic is currently en vogue. Or maybe because, in times of digitalisation, a great deal is dependent on two conditions – 0 and 1, white and black. The creative surface experts of the design centre at the Continental site Weissbach allocate this concise look to the ‘expressive art’

trend. Ralf Imbery, design director at Continental, explains: “What isn’t colourful has high contrasts – either classicgeometrically in black and white or as sophisticated typography. Black varnish sets the counterpoint to total transparency.” But ultimately, it is not about complying with the zeitgeist. What really matters is the feel-good effect in one’s own four walls. And this is simply very subjective. In the meantime, a home office, or at least a place where one organises things and manages correspondence, can now be found in every second home. It should be a well-structured, tidy place that nevertheless is inspiring. As can be seen in the above picture on the left, the three magnetic pin boards are each equipped with a different d-c-fix® design film. They are attached to a large wood panel which is fully upholstered with ‘d-c-fix® Matt Schwarz’. A home office can be this beautiful.

In the top-centre picture, the mix makes the room. Here, the low coffee table is the eyecatcher. Irregularly placed dark stripes adorn its surface. Used in this way, the design film ‘d-c-fix® Blackwood’ emits wonderful cosiness. When choosing pictures and accessories, muted colours should be used so that a harmonious relaxation zone for often-hectic everyday life emerges. Sometimes it does not take much to entirely change a room’s appearance. In the top-right picture, the white drawers appear new and exciting due to the two reversed triangles. The black and white contrast is very concise, the furniture seems dynamic. ‘d-c-fix® Matt Schwarz’ comes into effect on the fronts. Add some cool frames with typography and black and white motifs and the eyecatcher in the entrance area, or wherever some tension is needed, is done. Here, too, it holds true: minimum use, maximum wow! effect. d-c-fix® can be bought in DIY stores, selected specialist shops and on the following website. www.d-c-fix.com Issue 54  |  September 2017  |  13