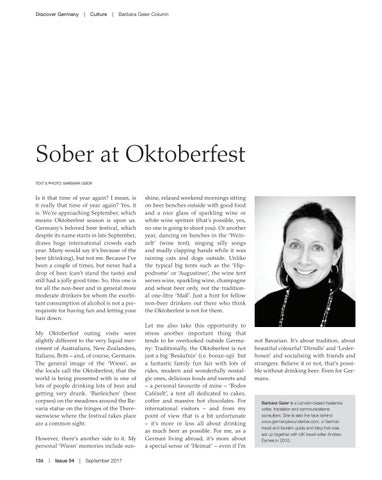 Is it that time of year again? I mean, is it really that time of year again? Yes, it is. We’re approaching September, which means Oktoberfest season is upon us. Germany’s beloved beer festival, which despite its name starts in late September, draws huge international crowds each year. Many would say it’s because of the beer (drinking), but not me. Because I’ve been a couple of times, but never had a drop of beer (can’t stand the taste) and still had a jolly good time. So, this one is for all the non-beer and in general more moderate drinkers for whom the exorbitant consumption of alcohol is not a prerequisite for having fun and letting your hair down. My Oktoberfest outing visits were slightly different to the very liquid merriment of Australians, New Zealanders, Italians, Brits – and, of course, Germans. The general image of the ‘Wiesn’, as the locals call the Oktoberfest, that the world is being presented with is one of lots of people drinking lots of beer and getting very drunk. ‘Bierleichen’ (beer corpses) on the meadows around the Bavaria statue on the fringes of the Theresienwiese where the festival takes place are a common sight. However, there’s another side to it. My personal ‘Wiesn’ memories include sun106  |  Issue 54  |  September 2017

shine, relaxed weekend mornings sitting on beer benches outside with good food and a nice glass of sparkling wine or white wine spritzer (that’s possible, yes, no one is going to shoot you). Or another year, dancing on benches in the ‘Weinzelt’ (wine tent), singing silly songs and madly clapping hands while it was raining cats and dogs outside. Unlike the typical big tents such as the ‘Hippodrome’ or ‘Augustiner’, the wine tent serves wine, sparkling wine, champagne and wheat beer only, not the traditional one-litre ‘Maß’. Just a hint for fellow non-beer drinkers out there who think the Oktoberfest is not for them. Let me also take this opportunity to stress another important thing that tends to be overlooked outside Germany: Traditionally, the Oktoberfest is not just a big ‘Besäufnis’ (i.e. booze-up) but a fantastic family fun fair with lots of rides, modern and wonderfully nostalgic ones, delicious foods and sweets and – a personal favourite of mine – ‘Bodos Cafézelt’, a tent all dedicated to cakes, coffee and massive hot chocolates. For international visitors – and from my point of view that is a bit unfortunate – it’s more or less all about drinking as much beer as possible. For me, as a German living abroad, it’s more about a special sense of ‘Heimat’ – even if I’m

not Bavarian. It’s about tradition, about beautiful colourful ‘Dirndls’ and ‘Lederhosen’ and socialising with friends and strangers. Believe it or not, that’s possible without drinking beer. Even for Germans.