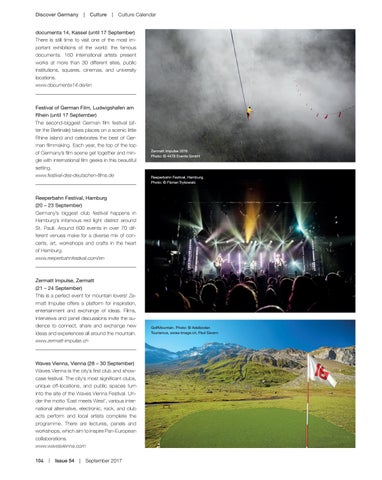 Discover Germany  |  Culture  |  Culture Calendar documenta 14, Kassel (until 17 September) There is still time to visit one of the most important exhibitions of the world: the famous documenta. 160 international artists present works at more than 30 different sites, public institutions, squares, cinemas, and university locations. www.documenta14.de/en

Festival of German Film, Ludwigshafen am Rhein (until 17 September) The second-biggest German film festival (after the Berlinale) takes places on a scenic little Rhine island and celebrates the best of German filmmaking. Each year, the top of the top of Germany’s film scene get together and mingle with international film geeks in this beautiful setting. www.festival-des-deutschen-films.de

Zermatt Impulse, Zermatt (21 – 24 September) This is a perfect event for mountain lovers! Zermatt Impulse offers a platform for inspiration, entertainment and exchange of ideas. Films, interviews and panel discussions invite the audience to connect, share and exchange new ideas and experiences all around the mountain. www.zermatt-impulse.ch