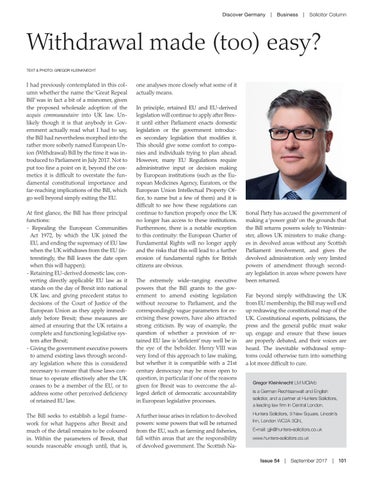 I had previously contemplated in this column whether the name the ‘Great Repeal Bill’ was in fact a bit of a misnomer, given the proposed wholesale adoption of the acquis communautaire into UK law. Unlikely though it is that anybody in Government actually read what I had to say, the Bill had nevertheless morphed into the rather more soberly named European Union (Withdrawal) Bill by the time it was introduced to Parliament in July 2017. Not to put too fine a point on it, beyond the cosmetics it is difficult to overstate the fundamental constitutional importance and far-reaching implications of the Bill, which go well beyond simply exiting the EU. At first glance, the Bill has three principal functions: - Repealing the European Communities Act 1972, by which the UK joined the EU, and ending the supremacy of EU law when the UK withdraws from the EU (interestingly, the Bill leaves the date open when this will happen); - Retaining EU-derived domestic law, converting directly applicable EU law as it stands on the day of Brexit into national UK law, and giving precedent status to decisions of the Court of Justice of the European Union as they apply immediately before Brexit; these measures are aimed at ensuring that the UK retains a complete and functioning legislative system after Brexit; - Giving the government executive powers to amend existing laws through secondary legislation where this is considered necessary to ensure that those laws continue to operate effectively after the UK ceases to be a member of the EU, or to address some other perceived deficiency of retained EU law. The Bill seeks to establish a legal framework for what happens after Brexit and much of the detail remains to be coloured in. Within the parameters of Brexit, that sounds reasonable enough until, that is,

one analyses more closely what some of it actually means. In principle, retained EU and EU-derived legislation will continue to apply after Brexit until either Parliament enacts domestic legislation or the government introduces secondary legislation that modifies it. This should give some comfort to companies and individuals trying to plan ahead. However, many EU Regulations require administrative input or decision making by European institutions (such as the European Medicines Agency, Euratom, or the European Union Intellectual Property Office, to name but a few of them) and it is difficult to see how these regulations can continue to function properly once the UK no longer has access to these institutions. Furthermore, there is a notable exception to this continuity: the European Charter of Fundamental Rights will no longer apply and the risks that this will lead to a further erosion of fundamental rights for British citizens are obvious. The extremely wide-ranging executive powers that the Bill grants to the government to amend existing legislation without recourse to Parliament, and the correspondingly vague parameters for exercising these powers, have also attracted strong criticism. By way of example, the question of whether a provision of retained EU law is ‘deficient’ may well be in the eye of the beholder. Henry VIII was very fond of this approach to law making, but whether it is compatible with a 21st century democracy may be more open to question, in particular if one of the reasons given for Brexit was to overcome the alleged deficit of democratic accountability in European legislative processes. A further issue arises in relation to devolved powers: some powers that will be returned from the EU, such as farming and fisheries, fall within areas that are the responsibility of devolved government. The Scottish Na-

tional Party has accused the government of making a ‘power grab’ on the grounds that the Bill returns powers solely to Westminster, allows UK ministers to make changes in devolved areas without any Scottish Parliament involvement, and gives the devolved administration only very limited powers of amendment through secondary legislation in areas where powers have been returned. Far beyond simply withdrawing the UK from EU membership, the Bill may well end up redrawing the constitutional map of the UK. Constitutional experts, politicians, the press and the general public must wake up, engage and ensure that these issues are properly debated, and their voices are heard. The inevitable withdrawal symptoms could otherwise turn into something a lot more difficult to cure. Gregor Kleinknecht LM MCIArb is a German Rechtsanwalt and English solicitor, and a partner at Hunters Solicitors, a leading law firm in Central London. Hunters Solicitors, 9 New Square, Lincoln’s Inn, London WC2A 3QN, E-mail: gjk@hunters-solicitors.co.uk www.hunters-solicitors.co.uk