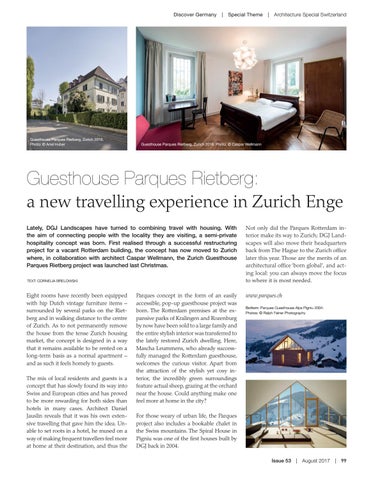 a new travelling experience in Zurich Enge Lately, DGJ Landscapes have turned to combining travel with housing. With the aim of connecting people with the locality they are visiting, a semi-private hospitality concept was born. First realised through a successful restructuring project for a vacant Rotterdam building, the concept has now moved to Zurich where, in collaboration with architect Caspar Wellmann, the Zurich Guesthouse Parques Rietberg project was launched last Christmas. TEXT: CORNELIA BRELOWSKI

Eight rooms have recently been equipped with hip Dutch vintage furniture items – surrounded by several parks on the Rietberg and in walking distance to the centre of Zurich. As to not permanently remove the house from the tense Zurich housing market, the concept is designed in a way that it remains available to be rented on a long-term basis as a normal apartment – and as such it feels homely to guests. The mix of local residents and guests is a concept that has slowly found its way into Swiss and European cities and has proved to be more rewarding for both sides than hotels in many cases. Architect Daniel Jauslin reveals that it was his own extensive travelling that gave him the idea. Unable to set roots in a hotel, he mused on a way of making frequent travellers feel more at home at their destination, and thus the

Parques concept in the form of an easily accessible, pop-up guesthouse project was born. The Rotterdam premises at the expansive parks of Kralingen and Rozenburg by now have been sold to a large family and the entire stylish interior was transferred to the lately restored Zurich dwelling. Here, Mascha Leummens, who already successfully managed the Rotterdam guesthouse, welcomes the curious visitor. Apart from the attraction of the stylish yet cosy interior, the incredibly green surroundings feature actual sheep, grazing at the orchard near the house. Could anything make one feel more at home in the city?

Not only did the Parques Rotterdam interior make its way to Zurich; DGJ Landscapes will also move their headquarters back from The Hague to the Zurich office later this year. Those are the merits of an architectural office ‘born global’, and acting local: you can always move the focus to where it is most needed. www.parques.ch Bottom: Parques Guesthouse Alps Pigniu 2004. Photos: © Ralph Feiner Photography

For those weary of urban life, the Parques project also includes a bookable chalet in the Swiss mountains. The Spiral House in Pigniu was one of the first houses built by DGJ back in 2004. Issue 53  |  August 2017  |  99