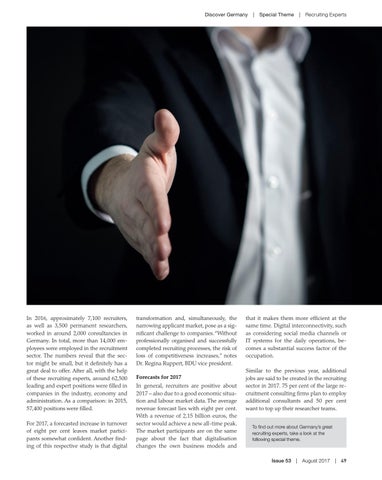 In 2016, approximately 7,100 recruiters, as well as 3,500 permanent researchers, worked in around 2,000 consultancies in Germany. In total, more than 14,000 employees were employed in the recruitment sector. The numbers reveal that the sector might be small, but it definitely has a great deal to offer. After all, with the help of these recruiting experts, around 62,500 leading and expert positions were filled in companies in the industry, economy and administration. As a comparison: in 2015, 57,400 positions were filled. For 2017, a forecasted increase in turnover of eight per cent leaves market participants somewhat confident. Another finding of this respective study is that digital

transformation and, simultaneously, the narrowing applicant market, pose as a significant challenge to companies. “Without professionally organised and successfully completed recruiting processes, the risk of loss of competitiveness increases,” notes Dr. Regina Ruppert, BDU vice president. Forecasts for 2017 In general, recruiters are positive about 2017 – also due to a good economic situation and labour market data. The average revenue forecast lies with eight per cent. With a revenue of 2,15 billion euros, the sector would achieve a new all-time peak. The market participants are on the same page about the fact that digitalisation changes the own business models and

that it makes them more efficient at the same time. Digital interconnectivity, such as considering social media channels or IT systems for the daily operations, becomes a substantial success factor of the occupation. Similar to the previous year, additional jobs are said to be created in the recruiting sector in 2017. 75 per cent of the large recruitment consulting firms plan to employ additional consultants and 50 per cent want to top up their researcher teams. To find out more about Germany’s great recruiting experts, take a look at the following special theme.