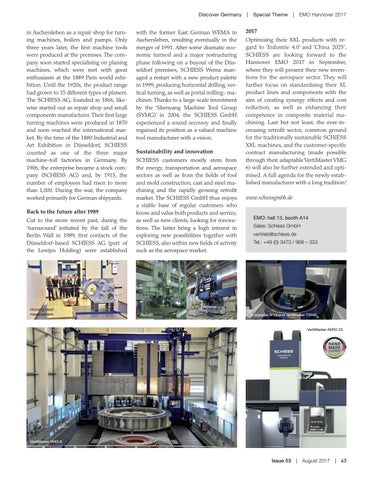 in Aschersleben as a repair shop for turning machines, boilers and pumps. Only three years later, the first machine tools were produced at the premises. The company soon started specialising on planing machines, which were met with great enthusiasm at the 1889 Paris world exhibition. Until the 1920s, the product range had grown to 15 different types of planers. The SCHIESS AG, founded in 1866, likewise started out as repair shop and small components manufacturer. Their first large turning machines were produced in 1870 and soon reached the international market. By the time of the 1880 Industrial and Art Exhibition in Düsseldorf, SCHIESS counted as one of the three major machine-toll factories in Germany. By 1906, the enterprise became a stock company (SCHIESS AG) and, by 1915, the number of employees had risen to more than 1,000. During the war, the company worked primarily for German shipyards. Back to the future after 1989 Cut to the more recent past, during the ‘turnaround’ initiated by the fall of the Berlin Wall in 1989, first contacts of the Düsseldorf-based SCHIESS AG (part of the Lentjes Holding) were established

with the former East German WEMA in Aschersleben, resulting eventually in the merger of 1991. After some dramatic economic turmoil and a major restructuring phase following on a buyout of the Düsseldorf premises, SCHIESS Wema managed a restart with a new product palette in 1999, producing horizontal drilling, vertical turning, as well as portal milling- machines. Thanks to a large-scale investment by the ‘Shenyang Machine Tool Group (SYMG)’ in 2004, the SCHIESS GmbH experienced a sound recovery and finally regained its position as a valued machine tool manufacturer with a vision. Sustainability and innovation SCHIESS customers mostly stem from the energy, transportation and aerospace sectors as well as from the fields of tool and mold construction, cast and steel machining and the rapidly growing retrofit market. The SCHIESS GmbH thus enjoys a stable base of regular customers who know and value both products and service, as well as new clients, looking for innovations. The latter bring a high interest in exploring new possibilities together with SCHIESS, also within new fields of activity such as the aerospace market.

2017 Optimising their XXL products with regard to ‘Industrie 4.0’ and ‘China 2025’, SCHIESS are looking forward to the Hannover EMO 2017 in September, where they will present their new inventions for the aerospace sector. They will further focus on standardising their XL product lines and components with the aim of creating synergy effects and cost reduction, as well as enhancing their competence in composite material machining. Last but not least, the ever-increasing retrofit sector, common ground for the traditionally sustainable SCHIESS XXL machines, and the customer-specific contract manufacturing (made possible through their adaptable VertiMaster VMG 6) will also be further extended and optimised. A full agenda for the newly established manufacturer with a long tradition! www.schiessgmbh.de EMO: hall 13, booth A14 Sales: Schiess GmbH vertrieb@schiess.de Tel.: +49 (0) 3473 / 968 – 333