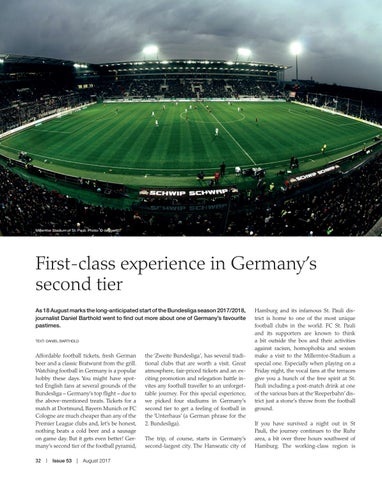 First-class experience in Germany’s second tier As 18 August marks the long-anticipated start of the Bundesliga season 2017/2018, journalist Daniel Barthold went to find out more about one of Germany’s favourite pastimes. TEXT: DANIEL BARTHOLD

Affordable football tickets, fresh German beer and a classic Bratwurst from the grill. Watching football in Germany is a popular hobby these days. You might have spotted English fans at several grounds of the Bundesliga – Germany’s top flight – due to the above-mentioned treats. Tickets for a match at Dortmund, Bayern Munich or FC Cologne are much cheaper than any of the Premier League clubs and, let’s be honest, nothing beats a cold beer and a sausage on game day. But it gets even better! Germany’s second tier of the football pyramid, 32  |  Issue 53  |  August 2017

the ‘Zweite Bundesliga’, has several traditional clubs that are worth a visit. Great atmosphere, fair-priced tickets and an exciting promotion and relegation battle invites any football traveller to an unforgettable journey. For this special experience, we picked four stadiums in Germany’s second tier to get a feeling of football in the ‘Unterhaus’ (a German phrase for the 2. Bundesliga). The trip, of course, starts in Germany’s second-largest city. The Hanseatic city of

Hamburg and its infamous St. Pauli district is home to one of the most unique football clubs in the world. FC St. Pauli and its supporters are known to think a bit outside the box and their activities against racism, homophobia and sexism make a visit to the Millerntor-Stadium a special one. Especially when playing on a Friday night, the vocal fans at the terraces give you a hunch of the free spirit at St. Pauli including a post-match drink at one of the various bars at the ‘Reeperbahn’ district just a stone’s throw from the football ground. If you have survived a night out in St Pauli, the journey continues to the Ruhr area, a bit over three hours southwest of Hamburg. The working-class region is