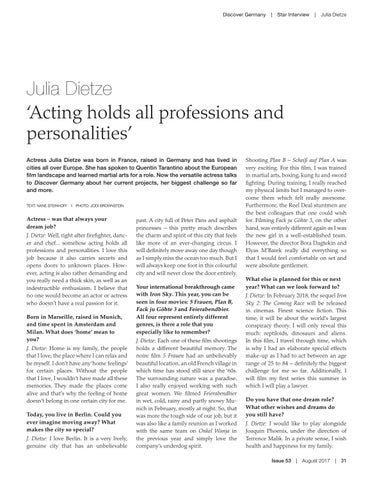 Julia Dietze ‘Acting holds all professions and personalities’ Actress Julia Dietze was born in France, raised in Germany and has lived in cities all over Europe. She has spoken to Quentin Tarantino about the European film landscape and learned martial arts for a role. Now the versatile actress talks to Discover Germany about her current projects, her biggest challenge so far and more. TEXT: NANE STEINHOFF  I  PHOTO: JODI BROWNSTEIN

Actress – was that always your dream job? J. Dietze: Well, right after firefighter, dancer and chef... somehow acting holds all professions and personalities. I love this job because it also carries secrets and opens doors to unknown places. However, acting is also rather demanding and you really need a thick skin, as well as an indestructible enthusiasm. I believe that no one would become an actor or actress who doesn’t have a real passion for it. Born in Marseille, raised in Munich, and time spent in Amsterdam and Milan. What does ‘home’ mean to you? J. Dietze: Home is my family, the people that I love, the place where I can relax and be myself. I don’t have any ‘home feelings’ for certain places. Without the people that I Iove, I wouldn’t have made all these memories. They made the places come alive and that’s why the feeling of home doesn’t belong in one certain city for me. Today, you live in Berlin. Could you ever imagine moving away? What makes the city so special? J. Dietze: I love Berlin. It is a very lively, genuine city that has an unbelievable

past. A city full of Peter Pans and asphalt princesses – this pretty much describes the charm and spirit of this city that feels like more of an ever-changing circus. I will definitely move away one day though as I simply miss the ocean too much. But I will always keep one foot in this colourful city and will never close the door entirely. Your international breakthrough came with Iron Sky. This year, you can be seen in four movies: 5 Frauen, Plan B, Fack ju Göhte 3 and Feierabendbier. All four represent entirely different genres, is there a role that you especially like to remember? J. Dietze: Each one of these film shootings holds a different beautiful memory. The noire film 5 Frauen had an unbelievably beautiful location, an old French village in which time has stood still since the ‘60s. The surrounding nature was a paradise. I also really enjoyed working with such great women. We filmed Feierabendbier in wet, cold, rainy and partly snowy Munich in February, mostly at night. So, that was more the tough side of our job, but it was also like a family reunion as I worked with the same team on Onkel Wanja in the previous year and simply love the company’s underdog spirit.

Shooting Plan B – Scheiß auf Plan A was very exciting. For this film, I was trained in martial arts, boxing, kung fu and sword fighting. During training, I really reached my physical limits but I managed to overcome them which felt really awesome. Furthermore, the Reel Deal stuntmen are the best colleagues that one could wish for. Filming Fack ju Göhte 3, on the other hand, was entirely different again as I was the new girl in a well-established team. However, the director Bora Dagtekin and Elyas M’Barek really did everything so that I would feel comfortable on set and were absolute gentlemen. What else is planned for this or next year? What can we look forward to? J. Dietze: In February 2018, the sequel Iron Sky 2: The Coming Race will be released in cinemas. Finest science fiction. This time, it will be about the world’s largest conspiracy theory. I will only reveal this much: reptiloids, dinosaurs and aliens. In this film, I travel through time, which is why I had an elaborate special effects make-up as I had to act between an age range of 25 to 84 – definitely the biggest challenge for me so far. Additionally, I will film my first series this summer in which I will play a lawyer. Do you have that one dream role? What other wishes and dreams do you still have? J. Dietze: I would like to play alongside Joaquin Phoenix, under the direction of Terrence Malik. In a private sense, I wish health and happiness for my family. Issue 53  |  August 2017  |  31