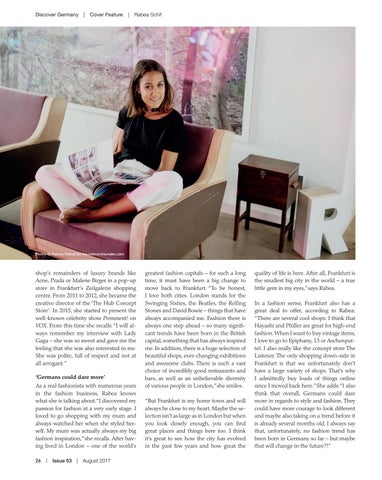 shop’s remainders of luxury brands like Acne, Prada or Malene Birger in a pop-up store in Frankfurt’s Zeilgalerie shopping centre. From 2011 to 2012, she became the creative director of the ‘The Hub Concept Store’. In 2015, she started to present the well-known celebrity show Prominent! on VOX. From this time she recalls: “I will always remember my interview with Lady Gaga – she was so sweet and gave me the feeling that she was also interested in me. She was polite, full of respect and not at all arrogant.” ‘Germans could dare more’ As a real fashionista with numerous years in the fashion business, Rabea knows what she is talking about.“I discovered my passion for fashion at a very early stage. I loved to go shopping with my mum and always watched her when she styled herself. My mum was actually always my big fashion inspiration,” she recalls. After having lived in London – one of the world’s 26  |  Issue 53  |  August 2017

greatest fashion capitals – for such a long time, it must have been a big change to move back to Frankfurt. “To be honest, I love both cities. London stands for the Swinging Sixties, the Beatles, the Rolling Stones and David Bowie – things that have always accompanied me. Fashion there is always one step ahead – so many significant trends have been born in the British capital, something that has always inspired me. In addition, there is a huge selection of beautiful shops, ever-changing exhibitions and awesome clubs. There is such a vast choice of incredibly good restaurants and bars, as well as an unbelievable diversity of various people in London,” she smiles. “But Frankfurt is my home town and will always be close to my heart. Maybe the selection isn’t as large as in London but when you look closely enough, you can find great places and things here too. I think it’s great to see how the city has evolved in the past few years and how great the

quality of life is here. After all, Frankfurt is the smallest big city in the world – a true little gem in my eyes,” says Rabea. In a fashion sense, Frankfurt also has a great deal to offer, according to Rabea: “There are several cool shops: I think that Hayashi and Pfüller are great for high-end fashion. When I want to buy vintage items, I love to go to Epiphany, 13 or Aschenputtel. I also really like the concept store The Listener. The only shopping down-side in Frankfurt is that we unfortunately don’t have a large variety of shops. That’s why I admittedly buy loads of things online since I moved back here.” She adds: “I also think that overall, Germans could dare more in regards to style and fashion. They could have more courage to look different and maybe also taking on a trend before it is already several months old. I always say that, unfortunately, no fashion trend has been born in Germany so far – but maybe that will change in the future?!”