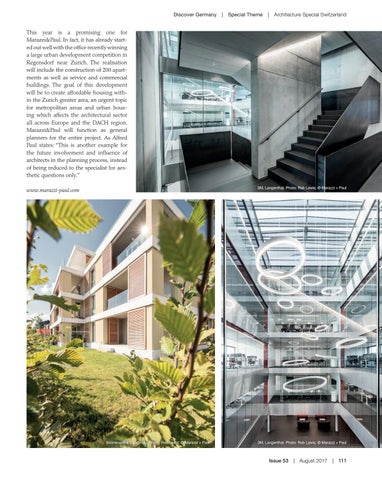 This year is a promising one for Marazzi&Paul. In fact, it has already started out well with the office recently winning a large urban development competition in Regensdorf near Zurich. The realisation will include the construction of 200 apartments as well as service and commercial buildings. The goal of this development will be to create affordable housing within the Zurich greater area, an urgent topic for metropolitan areas and urban housing which affects the architectural sector all across Europe and the DACH region. Marazzi&Paul will function as general planners for the entire project. As Alfred Paul states: “This is another example for the future involvement and influence of architects in the planning process, instead of being reduced to the specialist for aesthetic questions only.” 3M, Langenthal. Photo: Rob Lewis, © Marazzi + Paul