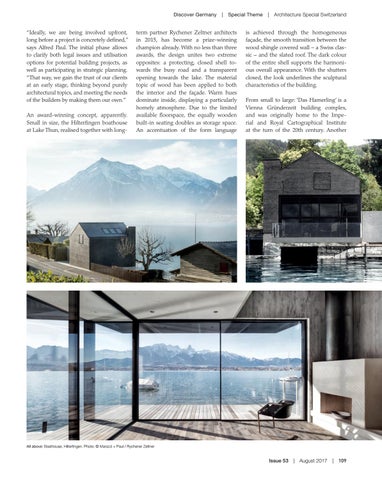 “Ideally, we are being involved upfront, long before a project is concretely defined,” says Alfred Paul. The initial phase allows to clarify both legal issues and utilisation options for potential building projects, as well as participating in strategic planning. “That way, we gain the trust of our clients at an early stage, thinking beyond purely architectural topics, and meeting the needs of the builders by making them our own.” An award-winning concept, apparently. Small in size, the Hilterfingen boathouse at Lake Thun, realised together with long-

term partner Rychener Zeltner architects in 2015, has become a prize-winning champion already. With no less than three awards, the design unites two extreme opposites: a protecting, closed shell towards the busy road and a transparent opening towards the lake. The material topic of wood has been applied to both the interior and the façade. Warm hues dominate inside, displaying a particularly homely atmosphere. Due to the limited available floorspace, the equally wooden built-in seating doubles as storage space. An accentuation of the form language

is achieved through the homogeneous façade, the smooth transition between the wood shingle covered wall – a Swiss classic – and the slated roof. The dark colour of the entire shell supports the harmonious overall appearance. With the shutters closed, the look underlines the sculptural characteristics of the building. From small to large: ‘Das Hamerling’ is a Vienna Gründerzeit building complex, and was originally home to the Imperial and Royal Cartographical Institute at the turn of the 20th century. Another