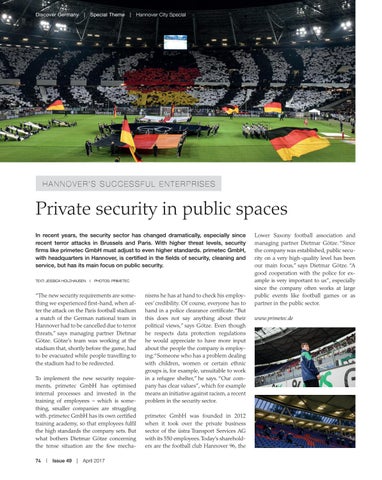 Private security in public spaces In recent years, the security sector has changed dramatically, especially since recent terror attacks in Brussels and Paris. With higher threat levels, security firms like primetec GmbH must adjust to even higher standards. primetec GmbH, with headquarters in Hannover, is certified in the fields of security, cleaning and service, but has its main focus on public security. TEXT: JESSICA HOLZHAUSEN  I  PHOTOS: PRIMETEC

“The new security requirements are something we experienced first-hand, when after the attack on the Paris football stadium a match of the German national team in Hannover had to be cancelled due to terror threats,” says managing partner Dietmar Götze. Götze’s team was working at the stadium that, shortly before the game, had to be evacuated while people travelling to the stadium had to be redirected. To implement the new security requirements, primetec GmbH has optimised internal processes and invested in the training of employees – which is something, smaller companies are struggling with. primetec GmbH has its own certified training academy, so that employees fulfil the high standards the company sets. But what bothers Dietmar Götze concerning the tense situation are the few mecha74  |  Issue 49  |  April 2017

nisms he has at hand to check his employees’ credibility. Of course, everyone has to hand in a police clearance certificate. “But this does not say anything about their political views,” says Götze. Even though he respects data protection regulations he would appreciate to have more input about the people the company is employing.“Someone who has a problem dealing with children, women or certain ethnic groups is, for example, unsuitable to work in a refugee shelter,” he says. “Our company has clear values”, which for example means an initiative against racism, a recent problem in the security sector. primetec GmbH was founded in 2012 when it took over the private business sector of the üstra Transport Services AG with its 550 employees. Today’s shareholders are the football club Hannover 96, the

Lower Saxony football association and managing partner Dietmar Götze. “Since the company was established, public security on a very high-quality level has been our main focus,” says Dietmar Götze. “A good cooperation with the police for example is very important to us”, especially since the company often works at large public events like football games or as partner in the public sector. www.primetec.de