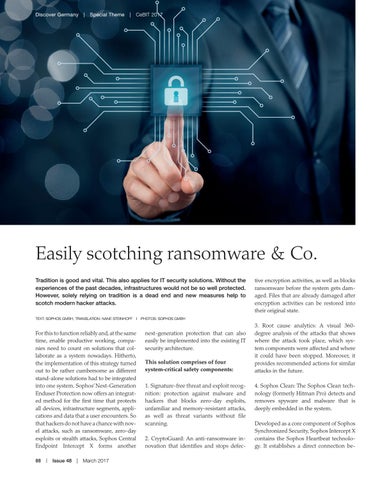 Easily scotching ransomware & Co. Tradition is good and vital. This also applies for IT security solutions. Without the experiences of the past decades, infrastructures would not be so well protected. However, solely relying on tradition is a dead end and new measures help to scotch modern hacker attacks.

For this to function reliably and, at the same time, enable productive working, companies need to count on solutions that collaborate as a system nowadays. Hitherto, the implementation of this strategy turned out to be rather cumbersome as different stand-alone solutions had to be integrated into one system. Sophos’ Next-Generation Enduser Protection now offers an integrated method for the first time that protects all devices, infrastructure segments, applications and data that a user encounters. So that hackers do not have a chance with novel attacks, such as ransomware, zero-day exploits or stealth attacks, Sophos Central Endpoint Intercept X forms another 88  |  Issue 48  |  March 2017

next-generation protection that can also easily be implemented into the existing IT security architecture. This solution comprises of four system-critical safety components: 1. Signature-free threat and exploit recognition: protection against malware and hackers that blocks zero-day exploits, unfamiliar and memory-resistant attacks, as well as threat variants without file scanning. 2. CryptoGuard: An anti-ransomware innovation that identifies and stops defec-

3. Root cause analytics: A visual 360degree analysis of the attacks that shows where the attack took place, which system components were affected and where it could have been stopped. Moreover, it provides recommended actions for similar attacks in the future. 4. Sophos Clean: The Sophos Clean technology (formerly Hitman Pro) detects and removes spyware and malware that is deeply embedded in the system. Developed as a core component of Sophos Synchronized Security, Sophos Intercept X contains the Sophos Heartbeat technology. It establishes a direct connection be-