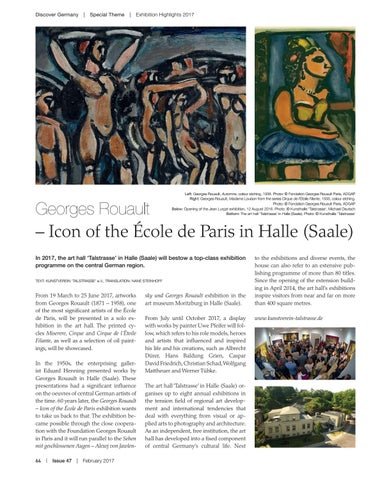 From 19 March to 25 June 2017, artworks from Georges Rouault (1871 – 1958), one of the most significant artists of the École de Paris, will be presented in a solo exhibition in the art hall. The printed cycles Miserere, Cirque and Cirque de l´Étoile Filante, as well as a selection of oil paintings, will be showcased. In the 1950s, the enterprising gallerist Eduard Henning presented works by Georges Rouault in Halle (Saale). These presentations had a significant influence on the oeuvres of central German artists of the time. 60 years later, the Georges Rouault – Icon of the École de Paris exhibition wants to take us back to that. The exhibition became possible through the close cooperation with the Foundation Georges Rouault in Paris and it will run parallel to the Sehen mit geschlossenen Augen – Alexej von Jawlen64  |  Issue 47  |  February 2017

sky und Georges Rouault exhibition in the art museum Moritzburg in Halle (Saale). From July until October 2017, a display with works by painter Uwe Pfeifer will follow, which refers to his role models, heroes and artists that influenced and inspired his life and his creations, such as Albrecht Dürer, Hans Baldung Grien, Caspar David Friedrich, Christian Schad, Wolfgang Mattheuer and Werner Tübke. The art hall ‘Talstrasse’ in Halle (Saale) organises up to eight annual exhibitions in the tension field of regional art development and international tendencies that deal with everything from visual or applied arts to photography and architecture. As an independent, free institution, the art hall has developed into a fixed component of central Germany’s cultural life. Next

to the exhibitions and diverse events, the house can also refer to an extensive publishing programme of more than 80 titles. Since the opening of the extension building in April 2014, the art hall’s exhibitions inspire visitors from near and far on more than 400 square metres. www.kunstverein-talstrasse.de