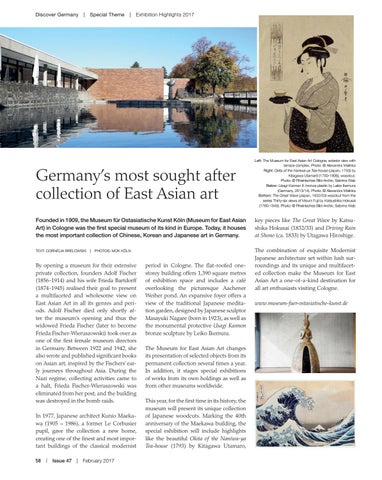 Germany’s most sought after collection of East Asian art

Founded in 1909, the Museum für Ostasiatische Kunst Köln (Museum for East Asian Art) in Cologne was the first special museum of its kind in Europe. Today, it houses the most important collection of Chinese, Korean and Japanese art in Germany.

key pieces like The Great Wave by Katsushika Hokusai (1832/33) and Driving Rain at Shono (ca. 1833) by Utagawa Hiroshige.

The combination of exquisite Modernist Japanese architecture set within lush surroundings and its unique and multifaceted collection make the Museum for East Asian Art a one-of-a-kind destination for all art enthusiasts visiting Cologne.

By opening a museum for their extensive private collection, founders Adolf Fischer (1856-1914) and his wife Frieda Bartdorff (1874-1945) realised their goal to present a multifaceted and wholesome view on East Asian Art in all its genres and periods. Adolf Fischer died only shortly after the museum’s opening and thus the widowed Frieda Fischer (later to become Frieda Fischer-Wieruszowski) took over as one of the first female museum directors in Germany. Between 1922 and 1942, she also wrote and published significant books on Asian art, inspired by the Fischers’ early journeys throughout Asia. During the Nazi regime, collecting activities came to a halt, Frieda Fischer-Wieruszowski was eliminated from her post, and the building was destroyed in the bomb raids. In 1977, Japanese architect Kunio Maekawa (1905 – 1986), a former Le Corbusier pupil, gave the collection a new home, creating one of the finest and most important buildings of the classical modernist 58  |  Issue 47  |  February 2017

period in Cologne. The flat-roofed onestorey building offers 1,390 square metres of exhibition space and includes a café overlooking the picturesque Aachener Weiher pond. An expansive foyer offers a view of the traditional Japanese meditation garden, designed by Japanese sculptor Masayuki Nagare (born in 1923), as well as the monumental protective Usagi Kannon bronze sculpture by Leiko Ikemura. The Museum for East Asian Art changes its presentation of selected objects from its permanent collection several times a year. In addition, it stages special exhibitions of works from its own holdings as well as from other museums worldwide. This year, for the first time in its history, the museum will present its unique collection of Japanese woodcuts. Marking the 40th anniversary of the Maekawa building, the special exhibition will include highlights like the beautiful Okita of the Naniwa-ya Tea-house (1793) by Kitagawa Utamaro,