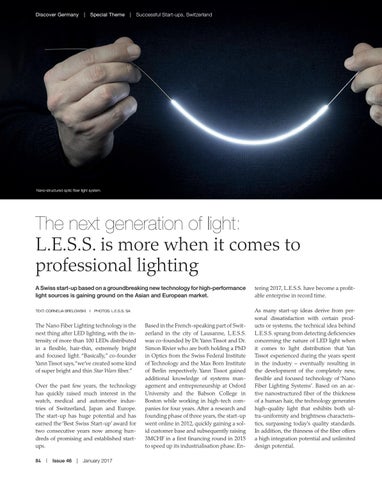 The next generation of light: L.E.S.S. is more when it comes to professional lighting A Swiss start-up based on a groundbreaking new technology for high-performance light sources is gaining ground on the Asian and European market.

tering 2017, L.E.S.S. have become a profitable enterprise in record time.

As many start-up ideas derive from personal dissatisfaction with certain products or systems, the technical idea behind L.E.S.S. sprang from detecting deficiencies concerning the nature of LED light when it comes to light distribution that Yan Tissot experienced during the years spent in the industry – eventually resulting in the development of the completely new, flexible and focused technology of ‘Nano Fiber Lighting Systems’. Based on an active nanostructured fiber of the thickness of a human hair, the technology generates high-quality light that exhibits both ultra-uniformity and brightness characteristics, surpassing today’s quality standards. In addition, the thinness of the fiber offers a high integration potential and unlimited design potential.

The Nano Fiber Lighting technology is the next thing after LED lighting, with the intensity of more than 100 LEDs distributed in a flexible, hair-thin, extremely bright and focused light. “Basically,” co-founder Yann Tissot says,“we’ve created some kind of super bright and thin Star Wars fiber.” Over the past few years, the technology has quickly raised much interest in the watch, medical and automotive industries of Switzerland, Japan and Europe. The start-up has huge potential and has earned the ‘Best Swiss Start-up’ award for two consecutive years now among hundreds of promising and established startups. 84  |  Issue 46  |  January 2017

Based in the French-speaking part of Switzerland in the city of Lausanne, L.E.S.S. was co-founded by Dr. Yann Tissot and Dr. Simon Rivier who are both holding a PhD in Optics from the Swiss Federal Institute of Technology and the Max Born Institute of Berlin respectively. Yann Tissot gained additional knowledge of systems management and entrepreneurship at Oxford University and the Babson College in Boston while working in high-tech companies for four years. After a research and founding phase of three years, the start-up went online in 2012, quickly gaining a solid customer base and subsequently raising 3MCHF in a first financing round in 2015 to speed up its industrialisation phase. En-