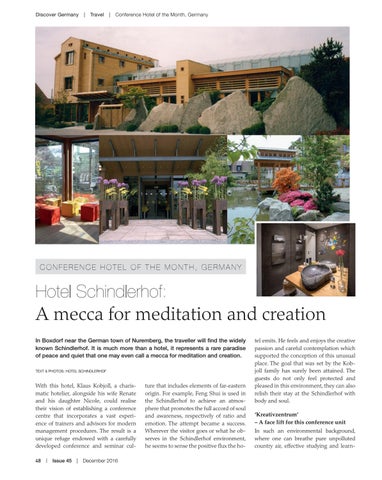 CONFERENCE HOTEL OF THE MONTH, GERMANY

With this hotel, Klaus Kobjoll, a charismatic hotelier, alongside his wife Renate and his daughter Nicole, could realise their vision of establishing a conference centre that incorporates a vast experience of trainers and advisors for modern management procedures. The result is a unique refuge endowed with a carefully developed conference and seminar cul48  |  Issue 45  |  December 2016

ture that includes elements of far-eastern origin. For example, Feng Shui is used in the Schindlerhof to achieve an atmosphere that promotes the full accord of soul and awareness, respectively of ratio and emotion. The attempt became a success. Wherever the visitor goes or what he observes in the Schindlerhof environment, he seems to sense the positive flux the ho-

tel emits. He feels and enjoys the creative passion and careful contemplation which supported the conception of this unusual place. The goal that was set by the Kobjoll family has surely been attained. The guests do not only feel protected and pleased in this environment, they can also relish their stay at the Schindlerhof with body and soul. ‘Kreativzentrum’ – A face lift for this conference unit In such an environmental background, where one can breathe pure unpolluted country air, effective studying and learn-