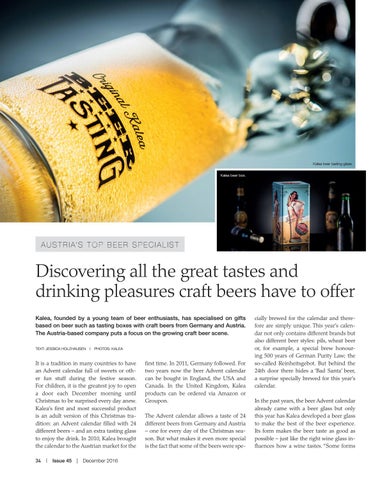 Discovering all the great tastes and drinking pleasures craft beers have to offer Kalea, founded by a young team of beer enthusiasts, has specialised on gifts based on beer such as tasting boxes with craft beers from Germany and Austria. The Austria-based company puts a focus on the growing craft beer scene. TEXT: JESSICA HOLZHAUSEN  I  PHOTOS: KALEA

It is a tradition in many countries to have an Advent calendar full of sweets or other fun stuff during the festive season. For children, it is the greatest joy to open a door each December morning until Christmas to be surprised every day anew. Kalea’s first and most successful product is an adult version of this Christmas tradition: an Advent calendar filled with 24 different beers – and an extra tasting glass to enjoy the drink. In 2010, Kalea brought the calendar to the Austrian market for the 34  |  Issue 45  |  December 2016

first time. In 2011, Germany followed. For two years now the beer Advent calendar can be bought in England, the USA and Canada. In the United Kingdom, Kalea products can be ordered via Amazon or Groupon. The Advent calendar allows a taste of 24 different beers from Germany and Austria – one for every day of the Christmas season. But what makes it even more special is the fact that some of the beers were spe-

cially brewed for the calendar and therefore are simply unique. This year’s calendar not only contains different brands but also different beer styles: pils, wheat beer or, for example, a special brew honouring 500 years of German Purity Law; the so-called Reinheitsgebot. But behind the 24th door there hides a ‘Bad Santa’ beer, a surprise specially brewed for this year’s calendar. In the past years, the beer Advent calendar already came with a beer glass but only this year has Kalea developed a beer glass to make the best of the beer experience. Its form makes the beer taste as good as possible – just like the right wine glass influences how a wine tastes. “Some forms