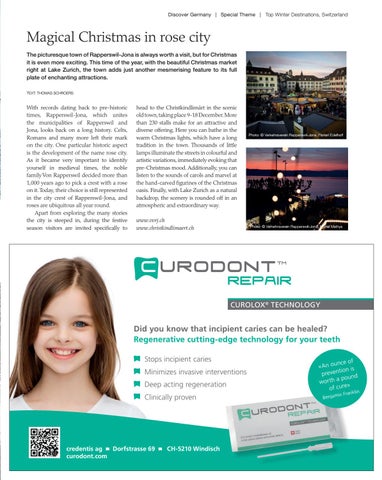 Magical Christmas in rose city The picturesque town of Rapperswil-Jona is always worth a visit, but for Christmas it is even more exciting. This time of the year, with the beautiful Christmas market right at Lake Zurich, the town adds just another mesmerising feature to its full plate of enchanting attractions. TEXT: THOMAS SCHROERS

With records dating back to pre-historic times, Rapperswil-Jona, which unites the municipalities of Rapperswil and Jona, looks back on a long history. Celts, Romans and many more left their mark on the city. One particular historic aspect is the development of the name rose city. As it became very important to identify yourself in medieval times, the noble family Von Rapperswil decided more than 1,000 years ago to pick a crest with a rose on it. Today, their choice is still represented in the city crest of Rapperswil-Jona, and roses are ubiquitous all year round. Apart from exploring the many stories the city is steeped in, during the festive season visitors are invited specifically to

head to the Christkindlimärt in the scenic old town, taking place 9-18 December. More than 230 stalls make for an attractive and diverse offering. Here you can bathe in the warm Christmas lights, which have a long tradition in the town. Thousands of little lamps illuminate the streets in colourful and artistic variations, immediately evoking that pre-Christmas mood. Additionally, you can listen to the sounds of carols and marvel at the hand-carved figurines of the Christmas oasis. Finally, with Lake Zurich as a natural backdrop, the scenery is rounded off in an atmospheric and extraordinary way. www.vvrj.ch www.christkindlimaert.ch