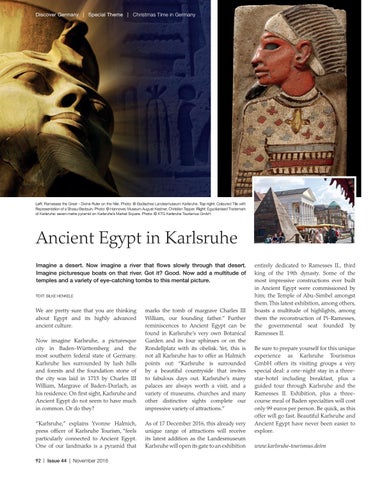 Ancient Egypt in Karlsruhe Imagine a desert. Now imagine a river that flows slowly through that desert. Imagine picturesque boats on that river. Got it? Good. Now add a multitude of temples and a variety of eye-catching tombs to this mental picture. TEXT: SILKE HENKELE

Now imagine Karlsruhe, a picturesque city in Baden-Württemberg and the most southern federal state of Germany. Karlsruhe lies surrounded by lush hills and forests and the foundation stone of the city was laid in 1715 by Charles III William, Margrave of Baden-Durlach, as his residence. On first sight, Karlsruhe and Ancient Egypt do not seem to have much in common. Or do they?

marks the tomb of margrave Charles III William, our founding father.” Further reminiscences to Ancient Egypt can be found in Karlsruhe’s very own Botanical Garden and its four sphinxes or on the Rondellplatz with its obelisk. Yet, this is not all Karlsruhe has to offer as Halmich points out: “Karlsruhe is surrounded by a beautiful countryside that invites to fabulous days out. Karlsruhe’s many palaces are always worth a visit, and a variety of museums, churches and many other distinctive sights complete our impressive variety of attractions.”

“Karlsruhe,” explains Yvonne Halmich, press officer of Karlsruhe Tourism, “feels particularly connected to Ancient Egypt. One of our landmarks is a pyramid that

As of 17 December 2016, this already very unique range of attractions will receive its latest addition as the Landesmuseum Karlsruhe will open its gate to an exhibition

We are pretty sure that you are thinking about Egypt and its highly advanced ancient culture.

entirely dedicated to Ramesses II., third king of the 19th dynasty. Some of the most impressive constructions ever built in Ancient Egypt were commissioned by him; the Temple of Abu-Simbel amongst them. This latest exhibition, among others, boasts a multitude of highlights, among them the reconstruction of Pi-Ramesses, the governmental seat founded by Ramesses II. Be sure to prepare yourself for this unique experience as Karlsruhe Tourismus GmbH offers its visiting groups a very special deal: a one-night stay in a threestar-hotel including breakfast, plus a guided tour through Karlsruhe and the Ramesses II. Exhibition, plus a threecourse meal of Baden specialties will cost only 99 euros per person. Be quick, as this offer will go fast. Beautiful Karlsruhe and Ancient Egypt have never been easier to explore. www.karlsruhe-tourismus.de/en