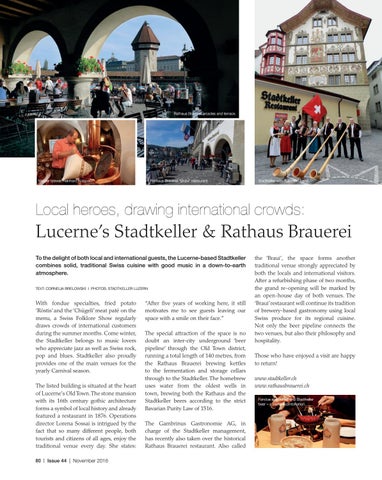 With fondue specialties, fried potato ‘Röstis’ and the ‘Chügeli’ meat paté on the menu, a Swiss Folklore Show regularly draws crowds of international customers during the summer months. Come winter, the Stadtkeller belongs to music lovers who appreciate jazz as well as Swiss rock, pop and blues. Stadtkeller also proudly provides one of the main venues for the yearly Carnival season. The listed building is situated at the heart of Lucerne's Old Town. The stone mansion with its 16th century gothic architecture forms a symbol of local history and already featured a restaurant in 1876. Operations director Lorena Sossai is intrigued by the fact that so many different people, both tourists and citizens of all ages, enjoy the traditional venue every day. She states: 80 | Issue 44 | November 2016

“After five years of working here, it still motivates me to see guests leaving our space with a smile on their face.” The special attraction of the space is no doubt an inter-city underground ‘beer pipeline’ through the Old Town district, running a total length of 140 metres, from the Rathaus Brauerei brewing kettles to the fermentation and storage cellars through to the Stadtkeller. The homebrew uses water from the oldest wells in town, brewing both the Rathaus and the Stadtkeller beers according to the strict Bavarian Purity Law of 1516. The Gambrinus Gastronomie AG, in charge of the Stadtkeller management, has recently also taken over the historical Rathaus Brauerei restaurant. Also called

the ‘Braui’, the space forms another traditional venue strongly appreciated by both the locals and international visitors. After a refurbishing phase of two months, the grand re-opening will be marked by an open-house day of both venues. The ‘Braui’ restaurant will continue its tradition of brewery-based gastronomy using local Swiss produce for its regional cuisine. Not only the beer pipeline connects the two venues, but also their philosophy and hospitality. Those who have enjoyed a visit are happy to return! www.stadtkeller.ch www.rathausbrauerei.ch Fondue specialties and Stadtkeller beer – a perfect combination.