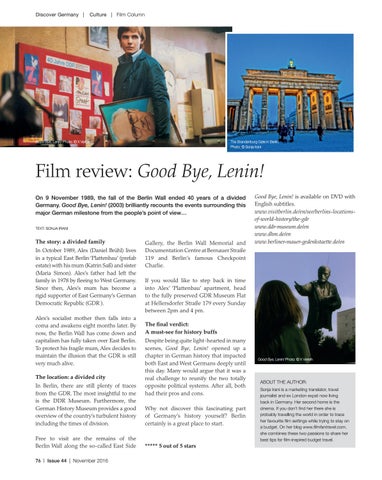 The story: a divided family In October 1989, Alex (Daniel Brühl) lives in a typical East Berlin ‘Plattenbau’ (prefab estate) with his mum (Katrin Saß) and sister (Maria Simon). Alex’s father had left the family in 1978 by fleeing to West Germany. Since then, Alex’s mum has become a rigid supporter of East Germany’s German Democratic Republic (GDR ). Alex’s socialist mother then falls into a coma and awakens eight months later. By now, the Berlin Wall has come down and capitalism has fully taken over East Berlin. To protect his fragile mum, Alex decides to maintain the illusion that the GDR is still very much alive. The location: a divided city In Berlin, there are still plenty of traces from the GDR. The most insightful to me is the DDR Museum. Furthermore, the German History Museum provides a good overview of the country’s turbulent history including the times of division. Free to visit are the remains of the Berlin Wall along the so-called East Side 76 | Issue 44 | November 2016

If you would like to step back in time into Alex’ ‘Plattenbau’ apartment, head to the fully preserved GDR Museum Flat at Hellersdorfer Straße 179 every Sunday between 2pm and 4 pm. The final verdict: A must-see for history buffs Despite being quite light-hearted in many scenes, Good Bye, Lenin! opened up a chapter in German history that impacted both East and West Germans deeply until this day. Many would argue that it was a real challenge to reunify the two totally opposite political systems. After all, both had their pros and cons. Why not discover this fascinating part of Germany’s history yourself? Berlin certainly is a great place to start.

ABOUT THE AUTHOR: Sonja Irani is a marketing translator, travel journalist and ex London expat now living back in Germany. Her second home is the cinema. If you don't find her there she is probably travelling the world in order to trace her favourite film settings while trying to stay on a budget. On her blog www.filmfantravel.com, she combines these two passions to share her best tips for film-inspired budget travel.