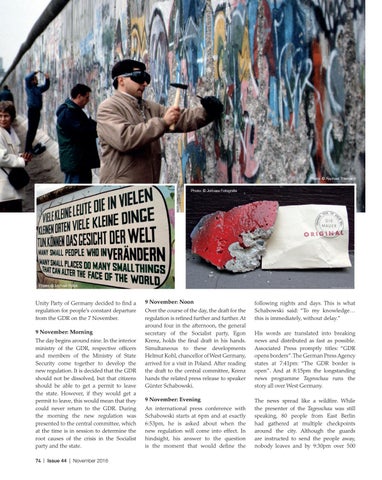 Unity Party of Germany decided to find a regulation for people’s constant departure from the GDR on the 7 November. 9 November: Morning The day begins around nine. In the interior ministry of the GDR, respective officers and members of the Ministry of State Security come together to develop the new regulation. It is decided that the GDR should not be dissolved, but that citizens should be able to get a permit to leave the state. However, if they would get a permit to leave, this would mean that they could never return to the GDR. During the morning the new regulation was presented to the central committee, which at the time is in session to determine the root causes of the crisis in the Socialist party and the state. 74 | Issue 44 | November 2016

9 November: Noon Over the course of the day, the draft for the regulation is refined further and further. At around four in the afternoon, the general secretary of the Socialist party, Egon Krenz, holds the final draft in his hands. Simultaneous to these developments Helmut Kohl, chancellor of West Germany, arrived for a visit in Poland. After reading the draft to the central committee, Krenz hands the related press release to speaker Günter Schabowski. 9 November: Evening An international press conference with Schabowski starts at 6pm and at exactly 6:53pm, he is asked about when the new regulation will come into effect. In hindsight, his answer to the question is the moment that would define the

following nights and days. This is what Schabowski said: “To my knowledge… this is immediately, without delay.” His words are translated into breaking news and distributed as fast as possible. Associated Press promptly titles: “GDR opens borders”. The German Press Agency states at 7:41pm: “The GDR border is open”. And at 8:15pm the longstanding news programme Tagesschau runs the story all over West Germany. The news spread like a wildfire. While the presenter of the Tagesschau was still speaking, 80 people from East Berlin had gathered at multiple checkpoints around the city. Although the guards are instructed to send the people away, nobody leaves and by 9:30pm over 500