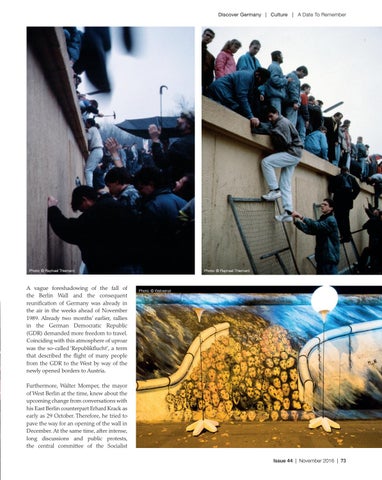 A vague foreshadowing of the fall of the Berlin Wall and the consequent reunification of Germany was already in the air in the weeks ahead of November 1989. Already two months’ earlier, rallies in the German Democratic Republic (GDR) demanded more freedom to travel. Coinciding with this atmosphere of uproar was the so-called ‘Republikflucht’, a term that described the flight of many people from the GDR to the West by way of the newly opened borders to Austria.

Furthermore, Walter Momper, the mayor of West Berlin at the time, knew about the upcoming change from conversations with his East Berlin counterpart Erhard Krack as early as 29 October. Therefore, he tried to pave the way for an opening of the wall in December. At the same time, after intense, long discussions and public protests, the central committee of the Socialist Issue 44 | November 2016 | 73