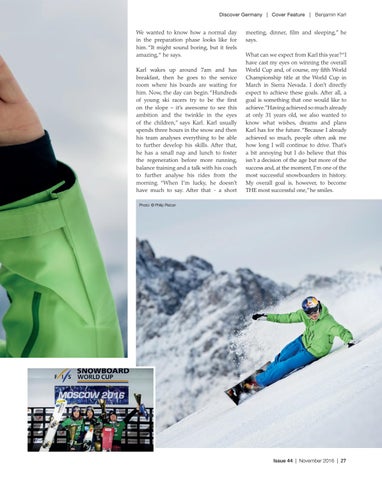 We wanted to know how a normal day in the preparation phase looks like for him. “It might sound boring, but it feels amazing,“ he says. Karl wakes up around 7am and has breakfast, then he goes to the service room where his boards are waiting for him. Now, the day can begin. “Hundreds of young ski racers try to be the first on the slope – it’s awesome to see this ambition and the twinkle in the eyes of the children,” says Karl. Karl usually spends three hours in the snow and then his team analyses everything to be able to further develop his skills. After that, he has a small nap and lunch to foster the regeneration before more running, balance training and a talk with his coach to further analyse his rides from the morning. “When I’m lucky, he doesn’t have much to say. After that - a short

meeting, dinner, film and sleeping,” he says. What can we expect from Karl this year? “I have cast my eyes on winning the overall World Cup and, of course, my fifth World Championship title at the World Cup in March in Sierra Nevada. I don’t directly expect to achieve these goals. After all, a goal is something that one would like to achieve.”Having achieved so much already at only 31 years old, we also wanted to know what wishes, dreams and plans Karl has for the future. “Because I already achieved so much, people often ask me how long I will continue to drive. That’s a bit annoying but I do believe that this isn’t a decision of the age but more of the success and, at the moment, I’m one of the most successful snowboarders in history. My overall goal is, however, to become THE most successful one,” he smiles.