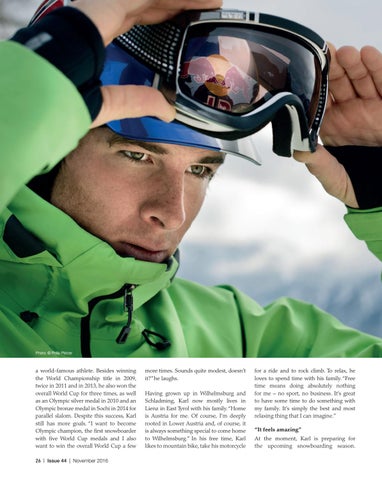 a world-famous athlete. Besides winning the World Championship title in 2009, twice in 2011 and in 2013, he also won the overall World Cup for three times, as well as an Olympic silver medal in 2010 and an Olympic bronze medal in Sochi in 2014 for parallel slalom. Despite this success, Karl still has more goals. “I want to become Olympic champion, the first snowboarder with five World Cup medals and I also want to win the overall World Cup a few 26 | Issue 44 | November 2016

more times. Sounds quite modest, doesn’t it?” he laughs. Having grown up in Wilhelmsburg and Schladming, Karl now mostly lives in Lienz in East Tyrol with his family. “Home is Austria for me. Of course, I’m deeply rooted in Lower Austria and, of course, it is always something special to come home to Wilhelmsburg.” In his free time, Karl likes to mountain bike, take his motorcycle

for a ride and to rock climb. To relax, he loves to spend time with his family. “Free time means doing absolutely nothing for me – no sport, no business. It’s great to have some time to do something with my family. It’s simply the best and most relaxing thing that I can imagine.” “It feels amazing” At the moment, Karl is preparing for the upcoming snowboarding season.