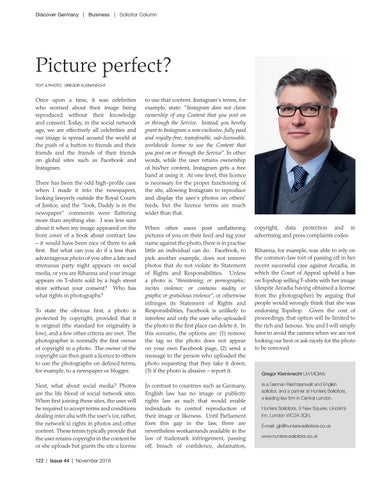 Once upon a time, it was celebrities who worried about their image being reproduced without their knowledge and consent. Today, in the social network age, we are effectively all celebrities and our image is spread around the world at the push of a button to friends and their friends and the friends of their friends on global sites such as Facebook and Instagram. There has been the odd high-profile case when I made it into the newspapers, looking lawyerly outside the Royal Courts of Justice, and the &quot;look, Daddy is in the newspaper&quot; comments were flattering more than anything else. I was less sure about it when my image appeared on the front cover of a book about contract law â&amp;#x20AC;&amp;#x201C; it would have been nice of them to ask first. But what can you do if a less than advantageous photo of you after a late and strenuous party night appears on social media, or you are Rihanna and your image appears on T-shirts sold by a high street store without your consent? Who has what rights in photographs?

to use that content. Instagram&#39;s terms, for example, state: &quot;Instagram does not claim ownership of any Content that you post on or through the Service. Instead, you hereby grant to Instagram a non-exclusive, fully paid and royalty-free, transferable, sub-licensable, worldwide license to use the Content that you post on or through the Service&quot;. In other words, while the user retains ownership of his/her content, Instagram gets a free hand at using it. At one level, this licence is necessary for the proper functioning of the site, allowing Instagram to reproduce and display the user&#39;s photos on others&#39; feeds, but the licence terms are much wider than that. copyright, data protection and in advertising and press complaints codes.

To state the obvious first, a photo is protected by copyright, provided that it is original (the standard for originality is low), and a few other criteria are met. The photographer is normally the first owner of copyright in a photo. The owner of the copyright can then grant a licence to others to use the photographs on defined terms, for example, to a newspaper or blogger.

When other users post unflattering pictures of you on their feed and tag your name against the photo, there is in practise little an individual can do. Facebook, to pick another example, does not remove photos that do not violate its Statement of Rights and Responsibilities. Unless a photo is &quot;threatening, or pornographic; incites violence; or contains nudity or graphic or gratuitous violence&quot;, or otherwise infringes its Statement of Rights and Responsibilities, Facebook is unlikely to interfere and only the user who uploaded the photo in the first place can delete it. In this scenario, the options are: (1) remove the tag so the photo does not appear on your own Facebook page, (2) send a message to the person who uploaded the photo requesting that they take it down, (3) if the photo is abusive â&amp;#x20AC;&amp;#x201C; report it.

Next, what about social media? Photos are the life blood of social network sites. When first joining these sites, the user will be required to accept terms and conditions dealing inter alia with the user&#39;s (or, rather, the network&#39;s) rights in photos and other content. These terms typically provide that the user retains copyright in the content he or she uploads but grants the site a license

In contrast to countries such as Germany, English law has no image or publicity rights law as such that would enable individuals to control reproduction of their image or likeness. Until Parliament fixes this gap in the law, there are nevertheless workarounds available in the law of trademark infringement, passing off, breach of confidence, defamation,

is a German Rechtsanwalt and English solicitor, and a partner at Hunters Solicitors, a leading law firm in Central London.

Rihanna, for example, was able to rely on the common-law tort of passing off in her recent successful case against Arcadia, in which the Court of Appeal upheld a ban on Topshop selling T-shirts with her image (despite Arcadia having obtained a license from the photographer) by arguing that people would wrongly think that she was endorsing Topshop. Given the cost of proceedings, that option will be limited to the rich and famous. You and I will simply have to avoid the camera when we are not looking our best or ask nicely for the photo to be removed.