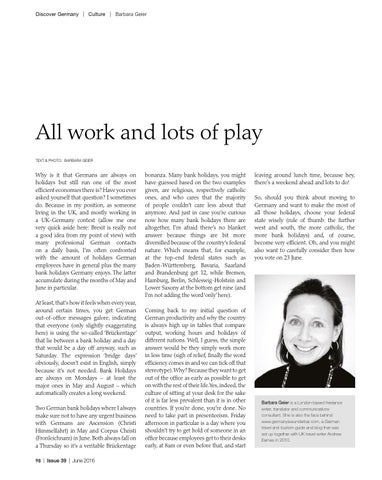 Why is it that Germans are always on holidays but still run one of the most efficient economies there is? Have you ever asked yourself that question? I sometimes do. Because in my position, as someone living in the UK, and mostly working in a UK-Germany context (allow me one very quick aside here: Brexit is really not a good idea from my point of view) with many professional German contacts on a daily basis, I’m often confronted with the amount of holidays German employees have in general plus the many bank holidays Germany enjoys. The latter accumulate during the months of May and June in particular. At least, that’s how it feels when every year, around certain times, you get German out-of-office messages galore, indicating that everyone (only slightly exaggerating here) is using the so-called ‘Brückentage’ that lie between a bank holiday and a day that would be a day off anyway, such as Saturday. The expression ‘bridge days’ obviously, doesn’t exist in English, simply because it’s not needed. Bank Holidays are always on Mondays – at least the major ones in May and August – which automatically creates a long weekend. Two German bank holidays where I always make sure not to have any urgent business with Germans are Ascension (Christi Himmelfahrt) in May and Corpus Christi (Fronleichnam) in June. Both always fall on a Thursday so it’s a veritable Brückentage 98 | Issue 39 | June 2016

bonanza. Many bank holidays, you might have guessed based on the two examples given, are religious, respectively catholic ones, and who cares that the majority of people couldn’t care less about that anymore. And just in case you’re curious now how many bank holidays there are altogether, I’m afraid there’s no blanket answer because things are bit more diversified because of the country’s federal nature. Which means that, for example, at the top-end federal states such as Baden-Württemberg, Bavaria, Saarland and Brandenburg get 12, while Bremen, Hamburg, Berlin, Schleswig-Holstein and Lower Saxony at the bottom get nine (and I’m not adding the word ‘only’ here). Coming back to my initial question of German productivity and why the country is always high up in tables that compare output, working hours and holidays of different nations. Well, I guess, the simple answer would be they simply work more in less time (sigh of relief, finally the word efficiency comes in and we can tick off that stereotype). Why? Because they want to get out of the office as early as possible to get on with the rest of their life.Yes, indeed, the culture of sitting at your desk for the sake of it is far less prevalent than it is in other countries. If you’re done, you’re done. No need to take part in presenteeism. Friday afternoon in particular is a day where you shouldn’t try to get hold of someone in an office because employees get to their desks early, at 8am or even before that, and start

leaving around lunch time, because hey, there’s a weekend ahead and lots to do! So, should you think about moving to Germany and want to make the most of all those holidays, choose your federal state wisely (rule of thumb: the further west and south, the more catholic, the more bank holidays) and, of course, become very efficient. Oh, and you might also want to carefully consider then how you vote on 23 June.