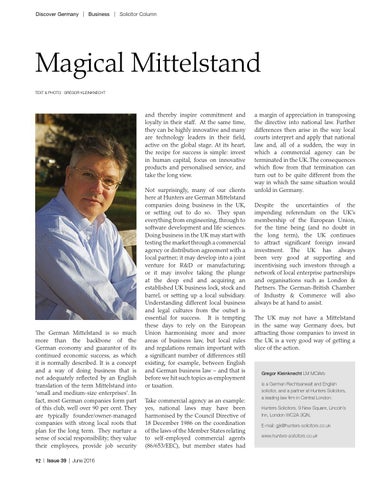 and thereby inspire commitment and loyalty in their staff. At the same time, they can be highly innovative and many are technology leaders in their field, active on the global stage. At its heart, the recipe for success is simple: invest in human capital, focus on innovative products and personalised service, and take the long view.

The German Mittelstand is so much more than the backbone of the German economy and guarantor of its continued economic success, as which it is normally described. It is a concept and a way of doing business that is not adequately reflected by an English translation of the term Mittelstand into ‘small and medium-size enterprises’. In fact, most German companies form part of this club, well over 90 per cent. They are typically founder/owner-managed companies with strong local roots that plan for the long term. They nurture a sense of social responsibility; they value their employees, provide job security 92 | Issue 39 | June 2016

Not surprisingly, many of our clients here at Hunters are German Mittelstand companies doing business in the UK, or setting out to do so. They span everything from engineering, through to software development and life sciences. Doing business in the UK may start with testing the market through a commercial agency or distribution agreement with a local partner; it may develop into a joint venture for R&amp;D or manufacturing; or it may involve taking the plunge at the deep end and acquiring an established UK business lock, stock and barrel, or setting up a local subsidiary. Understanding different local business and legal cultures from the outset is essential for success. It is tempting these days to rely on the European Union harmonising more and more areas of business law, but local rules and regulations remain important with a significant number of differences still existing, for example, between English and German business law – and that is before we hit such topics as employment or taxation. Take commercial agency as an example: yes, national laws may have been harmonised by the Council Directive of 18 December 1986 on the coordination of the laws of the Member States relating to self-employed commercial agents (86/653/EEC), but member states had

a margin of appreciation in transposing the directive into national law. Further differences then arise in the way local courts interpret and apply that national law and, all of a sudden, the way in which a commercial agency can be terminated in the UK. The consequences which flow from that termination can turn out to be quite different from the way in which the same situation would unfold in Germany. Despite the uncertainties of the impending referendum on the UK’s membership of the European Union, for the time being (and no doubt in the long term), the UK continues to attract significant foreign inward investment. The UK has always been very good at supporting and incentivising such investors through a network of local enterprise partnerships and organisations such as London &amp; Partners. The German-British Chamber of Industry &amp; Commerce will also always be at hand to assist. The UK may not have a Mittelstand in the same way Germany does, but attracting those companies to invest in the UK is a very good way of getting a slice of the action.