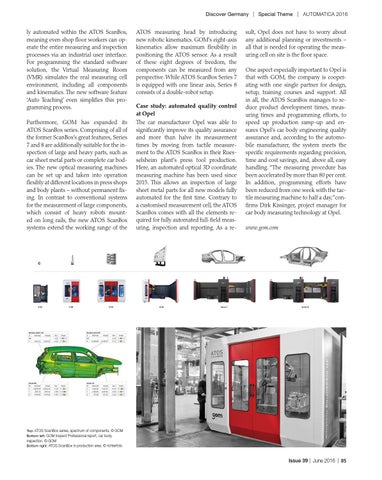 ly automated within the ATOS ScanBox, meaning even shop floor workers can operate the entire measuring and inspection processes via an industrial user interface. For programming the standard software solution, the Virtual Measuring Room (VMR) simulates the real measuring cell environment, including all components and kinematics. The new software feature ‘Auto Teaching’ even simplifies this programming process.

ATOS measuring head by introducing new robotic kinematics. GOM’s eight-axis kinematics allow maximum flexibility in positioning the ATOS sensor. As a result of these eight degrees of freedom, the components can be measured from any perspective. While ATOS ScanBox Series 7 is equipped with one linear axis, Series 8 consists of a double-robot setup.

Furthermore, GOM has expanded its ATOS ScanBox series. Comprising of all of the former ScanBox’s great features, Series 7 and 8 are additionally suitable for the inspection of large and heavy parts, such as car sheet metal parts or complete car bodies. The new optical measuring machines can be set up and taken into operation flexibly at different locations in press shops and body plants – without permanent fixing. In contrast to conventional systems for the measurement of large components, which consist of heavy robots mounted on long rails, the new ATOS ScanBox systems extend the working range of the

The car manufacturer Opel was able to significantly improve its quality assurance and more than halve its measurement times by moving from tactile measurement to the ATOS ScanBox in their Ruesselsheim plant’s press tool production. Here, an automated optical 3D coordinate measuring machine has been used since 2015. This allows an inspection of large sheet metal parts for all new models fully automated for the first time. Contrary to a customised measurement cell, the ATOS ScanBox comes with all the elements required for fully automated full-field measuring, inspection and reporting. As a re-

sult, Opel does not have to worry about any additional planning or investments – all that is needed for operating the measuring cell on site is the floor space. One aspect especially important to Opel is that with GOM, the company is cooperating with one single partner for design, setup, training courses and support. All in all, the ATOS ScanBox manages to reduce product development times, measuring times and programming efforts, to speed up production ramp-up and ensures Opel’s car body engineering quality assurance and, according to the automobile manufacturer, the system meets the specific requirements regarding precision, time and cost savings, and, above all, easy handling. “The measuring procedure has been accelerated by more than 80 per cent. In addition, programming efforts have been reduced from one week with the tactile measuring machine to half a day,”confirms Dirk Kissinger, project manager for car body measuring technology at Opel. www.gom.com