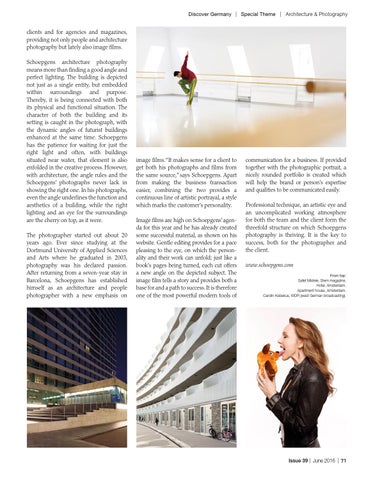 clients and for agencies and magazines, providing not only people and architecture photography but lately also image films. Schoepgens architecture photography means more than finding a good angle and perfect lighting. The building is depicted not just as a single entity, but embedded within surroundings and purpose. Thereby, it is being connected with both its physical and functional situation. The character of both the building and its setting is caught in the photograph, with the dynamic angles of futurist buildings enhanced at the same time. Schoepgens has the patience for waiting for just the right light and often, with buildings situated near water, that element is also enfolded in the creative process. However, with architecture, the angle rules and the Schoepgens’ photographs never lack in showing the right one. In his photographs, even the angle underlines the function and aesthetics of a building, while the right lighting and an eye for the surroundings are the cherry on top, as it were. The photographer started out about 20 years ago. Ever since studying at the Dortmund University of Applied Sciences and Arts where he graduated in 2003, photography was his declared passion. After returning from a seven-year stay in Barcelona, Schoepgens has established himself as an architecture and people photographer with a new emphasis on

image films. “It makes sense for a client to get both his photographs and films from the same source,” says Schoepgens. Apart from making the business transaction easier, combining the two provides a continuous line of artistic portrayal, a style which marks the customer’s personality. Image films are high on Schoepgens’ agenda for this year and he has already created some successful material, as shown on his website. Gentle editing provides for a pace pleasing to the eye, on which the personality and their work can unfold; just like a book’s pages being turned, each cut offers a new angle on the depicted subject. The image film tells a story and provides both a base for and a path to success. It is therefore one of the most powerful modern tools of

communication for a business. If provided together with the photographic portrait, a nicely rounded portfolio is created which will help the brand or person’s expertise and qualities to be communicated easily. Professional technique, an artistic eye and an uncomplicated working atmosphere for both the team and the client form the threefold structure on which Schoepgens photography is thriving. It is the key to success, both for the photographer and the client. www.schoepgens.com From top: Safet Mistele, Stern magazine. Hotel, Amsterdam. Apartment house, Amsterdam. Carolin Kebekus, WDR (west German broadcasting).