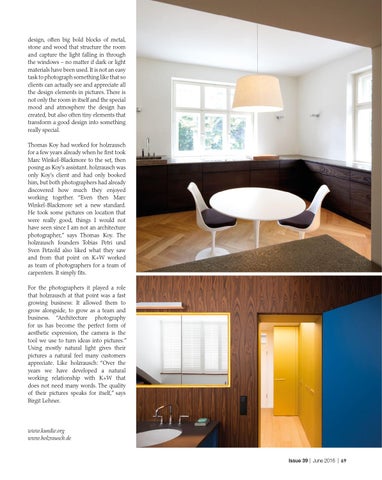 design, often big bold blocks of metal, stone and wood that structure the room and capture the light falling in through the windows – no matter if dark or light materials have been used. It is not an easy task to photograph something like that so clients can actually see and appreciate all the design elements in pictures. There is not only the room in itself and the special mood and atmosphere the design has created, but also often tiny elements that transform a good design into something really special. Thomas Koy had worked for holzrausch for a few years already when he first took Marc Winkel-Blackmore to the set, then posing as Koy’s assistant. holzrausch was only Koy’s client and had only booked him, but both photographers had already discovered how much they enjoyed working together. “Even then Marc Winkel-Blackmore set a new standard. He took some pictures on location that were really good, things I would not have seen since I am not an architecture photographer,” says Thomas Koy. The holzrausch founders Tobias Petri und Sven Petzold also liked what they saw and from that point on K+W worked as team of photographers for a team of carpenters. It simply fits. For the photographers it played a role that holzrausch at that point was a fast growing business: It allowed them to grow alongside, to grow as a team and business. “Architecture photography for us has become the perfect form of aesthetic expression, the camera is the tool we use to turn ideas into pictures.” Using mostly natural light gives their pictures a natural feel many customers appreciate. Like holzrausch: “Over the years we have developed a natural working relationship with K+W that does not need many words. The quality of their pictures speaks for itself,” says Birgit Lehner.