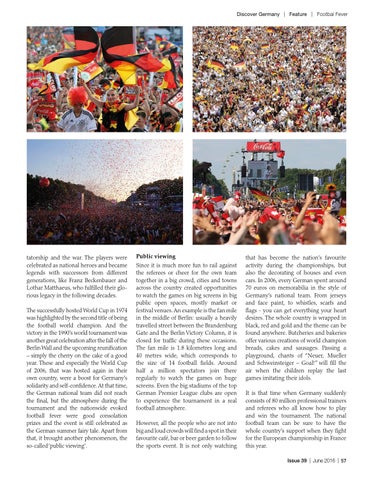 tatorship and the war. The players were celebrated as national heroes and became legends with successors from different generations, like Franz Beckenbauer and Lothar Matthaeus, who fulfilled their glorious legacy in the following decades. The successfully hosted World Cup in 1974 was highlighted by the second title of being the football world champion. And the victory in the 1990’s world tournament was another great celebration after the fall of the Berlin Wall and the upcoming reunification – simply the cherry on the cake of a good year. These and especially the World Cup of 2006, that was hosted again in their own country, were a boost for Germany’s solidarity and self-confidence. At that time, the German national team did not reach the final, but the atmosphere during the tournament and the nationwide evoked football fever were good consolation prizes and the event is still celebrated as the German summer fairy tale. Apart from that, it brought another phenomenon, the so-called ‘public viewing’.

Public viewing Since it is much more fun to rail against the referees or cheer for the own team together in a big crowd, cities and towns across the country created opportunities to watch the games on big screens in big public open spaces, mostly market or festival venues. An example is the fan mile in the middle of Berlin: usually a heavily travelled street between the Brandenburg Gate and the Berlin Victory Column, it is closed for traffic during these occasions. The fan mile is 1.8 kilometres long and 40 metres wide, which corresponds to the size of 14 football fields. Around half a million spectators join there regularly to watch the games on huge screens. Even the big stadiums of the top German Premier League clubs are open to experience the tournament in a real football atmosphere. However, all the people who are not into big and loud crowds will find a spot in their favourite café, bar or beer garden to follow the sports event. It is not only watching

that has become the nation’s favourite activity during the championships, but also the decorating of houses and even cars. In 2006, every German spent around 70 euros on memorabilia in the style of Germany’s national team. From jerseys and face paint, to whistles, scarfs and flags - you can get everything your heart desires. The whole country is wrapped in black, red and gold and the theme can be found anywhere. Butcheries and bakeries offer various creations of world champion breads, cakes and sausages. Passing a playground, chants of “Neuer, Mueller and Schweinsteiger – Goal!” will fill the air when the children replay the last games imitating their idols. It is that time when Germany suddenly consists of 80 million professional trainers and referees who all know how to play and win the tournament. The national football team can be sure to have the whole country’s support when they fight for the European championship in France this year. Issue 39 | June 2016 | 57