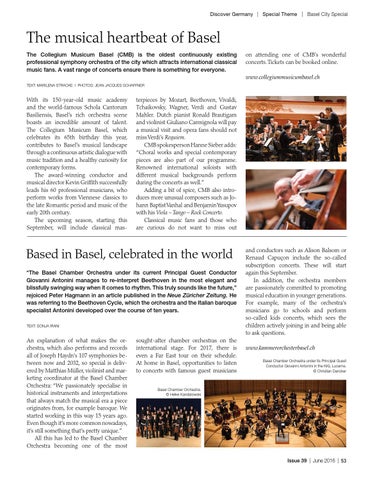 The musical heartbeat of Basel The Collegium Musicum Basel (CMB) is the oldest continuously existing professional symphony orchestra of the city which attracts international classical music fans. A vast range of concerts ensure there is something for everyone.

on attending one of CMB’s wonderful concerts. Tickets can be booked online. www.collegiummusicumbasel.ch

With its 150-year-old music academy and the world-famous Schola Cantorum Basiliensis, Basel’s rich orchestra scene boasts an incredible amount of talent. The Collegium Musicum Basel, which celebrates its 65th birthday this year, contributes to Basel’s musical landscape through a continuous artistic dialogue with music tradition and a healthy curiosity for contemporary forms. The award-winning conductor and musical director Kevin Griffith successfully leads his 60 professional musicians, who perform works from Viennese classics to the late Romantic period and music of the early 20th century. The upcoming season, starting this September, will include classical mas-

terpieces by Mozart, Beethoven, Vivaldi, Tchaikovsky, Wagner, Verdi and Gustav Mahler. Dutch pianist Ronald Brautigam and violinist Giuliano Carmignola will pay a musical visit and opera fans should not miss Verdi’s Requiem. CMB spokesperson Hanne Sieber adds: “Choral works and special contemporary pieces are also part of our programme. Renowned international soloists with different musical backgrounds perform during the concerts as well.” Adding a bit of spice, CMB also introduces more unusual composers such as Johann Baptist Vanhal and Benjamin Yusupov with his Viola – Tango – Rock Concerto. Classical music fans and those who are curious do not want to miss out

Based in Basel, celebrated in the world “The Basel Chamber Orchestra under its current Principal Guest Conductor Giovanni Antonini manages to re-interpret Beethoven in the most elegant and blissfully swinging way when it comes to rhythm. This truly sounds like the future,” rejoiced Peter Hagmann in an article published in the Neue Züricher Zeitung. He was referring to the Beethoven Cycle, which the orchestra and the Italian baroque specialist Antonini developed over the course of ten years. TEXT: SONJA IRANI

An explanation of what makes the orchestra, which also performs and records all of Joseph Haydn’s 107 symphonies between now and 2032, so special is delivered by Matthias Müller, violinist and marketing coordinator at the Basel Chamber Orchestra: “We passionately specialise in historical instruments and interpretations that always match the musical era a piece originates from, for example baroque. We started working in this way 15 years ago. Even though it’s more common nowadays, it’s still something that’s pretty unique.” All this has led to the Basel Chamber Orchestra becoming one of the most

sought-after chamber orchestras on the international stage. For 2017, there is even a Far East tour on their schedule. At home in Basel, opportunities to listen to concerts with famous guest musicians

and conductors such as Alison Balsom or Renaud Capuçon include the so-called subscription concerts. These will start again this September. In addition, the orchestra members are passionately committed to promoting musical education in younger generations. For example, many of the orchestra’s musicians go to schools and perform so-called kids concerts, which sees the children actively joining in and being able to ask questions. www.kammerorchesterbasel.ch Basel Chamber Orchestra under its Principal Guest Conductor Giovanni Antonini in the KKL Lucerne. © Christian Dancker