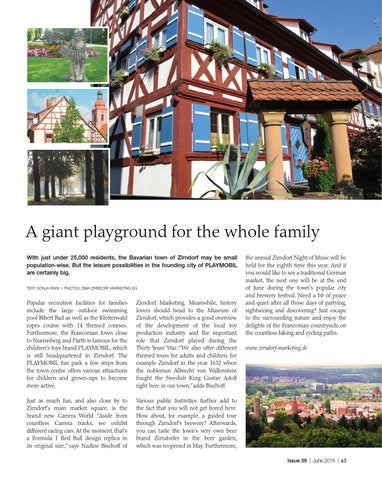 A giant playground for the whole family With just under 25,000 residents, the Bavarian town of Zirndorf may be small population-wise. But the leisure possibilities in the founding city of PLAYMOBIL are certainly big. TEXT: SONJA IRANI I PHOTOS: ZIMA ZIRNDORF MARKETING EG

Popular recreation facilities for families include the large outdoor swimming pool Bibert Bad as well as the Kletterwald ropes course with 14 themed courses. Furthermore, the Franconian town close to Nuremberg and Fürth is famous for the children’s toys brand PLAYMOBIL, which is still headquartered in Zirndorf. The PLAYMOBIL fun park a few steps from the town centre offers various attractions for children and grown-ups to become more active.

Zirndorf Marketing. Meanwhile, history lovers should head to the Museum of Zirndorf, which provides a good overview of the development of the local toy production industry and the important role that Zirndorf played during the Thirty Years’ War. “We also offer different themed tours for adults and children, for example Zirndorf in the year 1632 when the nobleman Albrecht von Wallenstein fought the Swedish King Gustav Adolf right here in our town,” adds Bischoff.

Just as much fun, and also close by to Zirndorf’s main market square, is the brand new Carrera World. “Aside from countless Carrera tracks, we exhibit different racing cars. At the moment, that’s a Formula 1 Red Bull design replica in its original size,” says Nadine Bischoff of

Various public festivities further add to the fact that you will not get bored here. How about, for example, a guided tour through Zirndorf’s brewery? Afterwards, you can taste the town’s very own beer brand Zirndorfer in the beer garden, which was reopened in May. Furthermore,

the annual Zirndorf Night of Music will be held for the eighth time this year. And if you would like to see a traditional German market, the next one will be at the end of June during the town’s popular city and brewery festival. Need a bit of peace and quiet after all those days of partying, sightseeing and discovering? Just escape to the surrounding nature and enjoy the delights of the Franconian countryside on the countless hiking and cycling paths. www.zirndorf-marketing.de