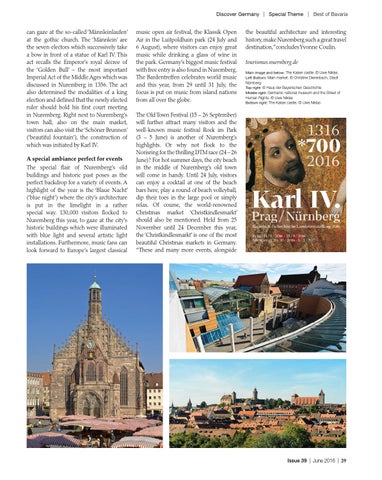 can gaze at the so-called ‘Männleinlaufen’ at the gothic church. The ‘Männlein’ are the seven electors which successively take a bow in front of a statue of Karl IV. This act recalls the Emperor’s royal decree of the ‘Golden Bull’ – the most important Imperial Act of the Middle Ages which was discussed in Nuremberg in 1356. The act also determined the modalities of a king election and defined that the newly elected ruler should hold his first court meeting in Nuremberg. Right next to Nuremberg’s town hall, also on the main market, visitors can also visit the ‘Schöner Brunnen’ (‘beautiful fountain’), the construction of which was initiated by Karl IV. A special ambiance perfect for events The special flair of Nuremberg’s old buildings and historic past poses as the perfect backdrop for a variety of events. A highlight of the year is the ‘Blaue Nacht’ (‘blue night’) where the city’s architecture is put in the limelight in a rather special way. 130,000 visitors flocked to Nuremberg this year, to gaze at the city’s historic buildings which were illuminated with blue light and several artistic light installations. Furthermore, music fans can look forward to Europe’s largest classical

music open air festival, the Klassik Open Air in the Luitpoldhain park (24 July and 6 August), where visitors can enjoy great music while drinking a glass of wine in the park. Germany’s biggest music festival with free entry is also found in Nuremberg. The Bardentreffen celebrates world music and this year, from 29 until 31 July, the focus is put on music from island nations from all over the globe.

The Old Town Festival (15 – 26 September) will further attract many visitors and the well-known music festival Rock im Park (3 – 5 June) is another of Nuremberg’s highlights. Or why not flock to the Norisring for the thrilling DTM race (24 – 26 June)? For hot summer days, the city beach in the middle of Nuremberg’s old town will come in handy. Until 24 July, visitors can enjoy a cocktail at one of the beach bars here, play a round of beach volleyball, dip their toes in the large pool or simply relax. Of course, the world-renowned Christmas market ‘Christkindlesmarkt’ should also be mentioned. Held from 25 November until 24 December this year, the ‘Christkindlesmarkt’ is one of the most beautiful Christmas markets in Germany. “These and many more events, alongside