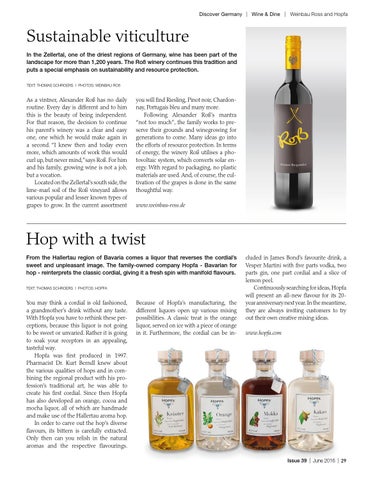 Sustainable viticulture In the Zellertal, one of the driest regions of Germany, wine has been part of the landscape for more than 1,200 years. The Roß winery continues this tradition and puts a special emphasis on sustainability and resource protection. TEXT: THOMAS SCHROERS I PHOTOS: WEINBAU ROß

As a vintner, Alexander Roß has no daily routine. Every day is different and to him this is the beauty of being independent. For that reason, the decision to continue his parent’s winery was a clear and easy one, one which he would make again in a second. “I knew then and today even more, which amounts of work this would curl up, but never mind,”says Roß. For him and his family, growing wine is not a job, but a vocation. Located on the Zellertal’s south side, the lime-marl soil of the Roß vineyard allows various popular and lesser known types of grapes to grow. In the current assortment

you will find Riesling, Pinot noir, Chardonnay, Portugais bleu and many more. Following Alexander Roß’s mantra “not too much”, the family works to preserve their grounds and winegrowing for generations to come. Many ideas go into the efforts of resource protection. In terms of energy, the winery Roß utilises a photovoltaic system, which converts solar energy. With regard to packaging, no plastic materials are used. And, of course, the cultivation of the grapes is done in the same thoughtful way. www.weinbau-ross.de

Hop with a twist From the Hallertau region of Bavaria comes a liquor that reverses the cordial’s sweet and unpleasant image. The family-owned company Hopfa - Bavarian for hop - reinterprets the classic cordial, giving it a fresh spin with manifold flavours. TEXT: THOMAS SCHROERS I PHOTOS: HOPFA

You may think a cordial is old fashioned, a grandmother’s drink without any taste. With Hopfa you have to rethink these perceptions, because this liquor is not going to be sweet or unvaried. Rather it is going to soak your receptors in an appealing, tasteful way. Hopfa was first produced in 1997. Pharmacist Dr. Kurt Berndl knew about the various qualities of hops and in combining the regional product with his profession’s traditional art, he was able to create his first cordial. Since then Hopfa has also developed an orange, cocoa and mocha liquor, all of which are handmade and make use of the Hallertau aroma hop. In order to carve out the hop’s diverse flavours, its bittern is carefully extracted. Only then can you relish in the natural aromas and the respective flavourings.

Because of Hopfa’s manufacturing, the different liquors open up various mixing possibilities. A classic treat is the orange liquor, served on ice with a piece of orange in it. Furthermore, the cordial can be in-

cluded in James Bond’s favourite drink, a Vesper Martini with five parts vodka, two parts gin, one part cordial and a slice of lemon peel. Continuously searching for ideas, Hopfa will present an all-new flavour for its 20year anniversary next year. In the meantime, they are always inviting customers to try out their own creative mixing ideas. www.hopfa.com