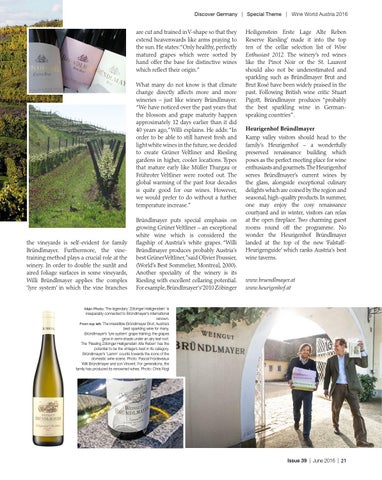 are cut and trained in V-shape so that they extend heavenwards like arms praying to the sun. He states:“Only healthy, perfectly matured grapes which were sorted by hand offer the base for distinctive wines which reflect their origin.” What many do not know is that climate change directly affects more and more wineries – just like winery Bründlmayer. “We have noticed over the past years that the blossom and grape maturity happen approximately 12 days earlier than it did 40 years ago,” Willi explains. He adds: “In order to be able to still harvest fresh and light white wines in the future, we decided to create Grüner Veltliner and Riesling gardens in higher, cooler locations. Types that mature early like Müller Thurgau or Frühroter Veltliner were rooted out. The global warming of the past four decades is quite good for our wines. However, we would prefer to do without a further temperature increase.”

the vineyards is self-evident for family Bründlmayer. Furthermore, the vinetraining method plays a crucial role at the winery. In order to double the sunlit and aired foliage surfaces in some vineyards, Willi Bründlmayer applies the complex ‘lyre system’ in which the vine branches

Heiligenstein Erste Lage Alte Reben Reserve Riesling’ made it into the top ten of the cellar selection list of Wine Enthusiast 2012. The winery’s red wines like the Pinot Noir or the St. Laurent should also not be underestimated and sparkling such as Bründlmayer Brut and Brut Rosé have been widely praised in the past. Following British wine critic Stuart Pigott, Bründlmayer produces “probably the best sparkling wine in Germanspeaking countries”. Heurigenhof Bründlmayer Kamp valley visitors should head to the family’s Heurigenhof – a wonderfully preserved renaissance building which poses as the perfect meeting place for wine enthusiasts and gourmets. The Heurigenhof serves Bründlmayer’s current wines by the glass, alongside exceptional culinary delights which are coined by the region and seasonal, high-quality products. In summer, one may enjoy the cosy renaissance courtyard and in winter, visitors can relax at the open fireplace. Two charming guest rooms round off the programme. No wonder the Heurigenhof Bründlmayer landed at the top of the new ‘FalstaffHeurigenguide’ which ranks Austria’s best wine taverns.

Main Photo: The legendary ‘Zöbinger Heiligenstein’ is inseparably connected to Bründlmayer’s international renown. From top left: The irresistible Bründlmayer Brut; Austria’s best sparkling wine for many. Bründlmayer’s ‘lyre system’ grape training; the grapes grow in semi-shade under an airy leaf roof. The ‘Riesling Zöbinger Heiligenstein Alte Reben’ has the potential to be the vintage’s best in its category. Bründlmayer’s ‘Lamm’ counts towards the icons of the domestic wine scene. Photo: Pascal Froideveaux Willi Bründlmayer and son Vincent. For generations, the family has produced its renowned wines. Photo: Chris Rogl