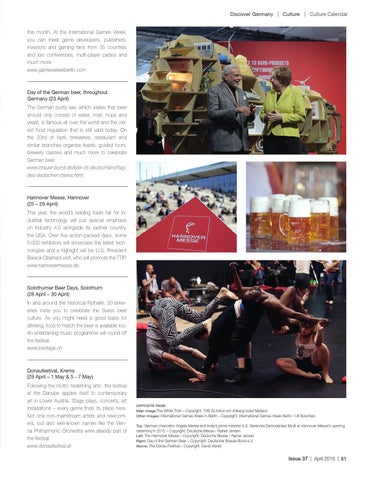 Discover Germany | Culture | Culture Calendar this month. At the International Games Week, you can meet game developers, publishers, investors and gaming fans from 35 countries and join conferences, multi-player parties and much more. www.gamesweekberlin.com

Day of the German beer, throughout Germany (23 April) The German purity law, which states that beer should only consist of water, malt, hops and yeast, is famous all over the world and the oldest food regulation that is still valid today. On the 23rd of April, breweries, restaurant and similar branches organise feasts, guided tours, brewery classes and much more to celebrate German beer. www.brauer-bund.de/bier-ist-deutschland/tagdes-deutschen-bieres.html

Hannover Messe, Hannover (25 – 29 April) This year, the world’s leading trade fair for industrial technology will put special emphasis on Industry 4.0 alongside its partner country, the USA. Over five action-packed days, some 5,000 exhibitors will showcase the latest technologies and a highlight will be U.S. President Barack Obama’s visit, who will promote the TTIP. www.hannovermesse.de

Solothurner Beer Days, Solothurn (28 April – 30 April) In and around the historical Rythalle, 30 breweries invite you to celebrate the Swiss beer culture. As you might need a good basis for drinking, food to match the beer is available too. An entertaining music programme will round off the festival. www.biertage.ch

Donaufestival, Krems (29 April – 1 May & 5 - 7 May) Following the motto 'redefining arts', the festival at the Danube applies itself to contemporary art in Lower Austria. Stage plays, concerts, art installations – every genre finds its place here. Not only non-mainstream artists and newcomers, but also well-known names like the Vienna Philharmonic Orchestra were already part of the festival. www.donaufestival.at