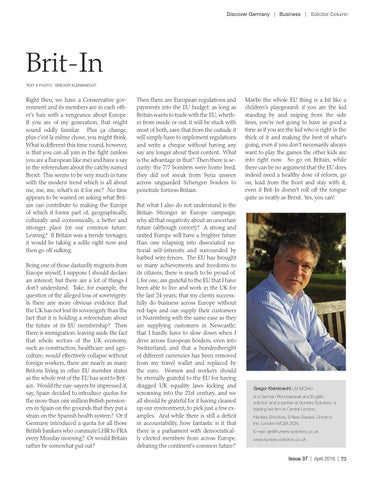 Right then, we have a Conservative government and its members are in each other’s hair with a vengeance about Europe. If you are of my generation, that might sound oddly familiar. Plus ça change, plus c’est la même chose, you might think. What is different this time round, however, is that you can all join in the fight (unless you are a European like me) and have a say in the referendum about the catchy named Brexit. This seems to be very much in tune with the modern trend which is all about me, me, me, what’s in it for me? No time appears to be wasted on asking what Britain can contribute to making the Europe of which it forms part of, geographically, culturally and economically, a better and stronger place for our common future. Leaving? If Britain was a trendy teenager, it would be taking a selfie right now and then go off sulking. Being one of those dastardly migrants from Europe myself, I suppose I should declare an interest; but there are a lot of things I don’t understand. Take, for example, the question of the alleged loss of sovereignty. Is there any more obvious evidence that the UK has not lost its sovereignty than the fact that it is holding a referendum about the future of its EU membership? Then there is immigration: leaving aside the fact that whole sectors of the UK economy, such as construction, healthcare and agriculture, would effectively collapse without foreign workers, there are nearly as many Britons living in other EU member states as the whole rest of the EU has sent to Britain. Would the nay-sayers be impressed if, say, Spain decided to introduce quotas for the more than one million British pensioners in Spain on the grounds that they put a strain on the Spanish health system? Or if Germany introduced a quota for all those British bankers who commute LHR to FRA every Monday morning? Or would Britain rather be somewhat put out?

Then there are European regulations and payments into the EU budget: as long as Britain wants to trade with the EU, whether from inside or out, it will be stuck with most of both, save that from the outside it will simply have to implement regulations and write a cheque without having any say any longer about their content. What is the advantage in that? Then there is security: the 7/7 bombers were home bred; they did not sneak from Syria unseen across unguarded Schengen borders to penetrate fortress Britain. But what I also do not understand is the Britain Stronger in Europe campaign: why all that negativity about an uncertain future (although correct)? A strong and united Europe will have a brighter future than one relapsing into dissociated national self-interests and surrounded by barbed wire fences. The EU has brought so many achievements and freedoms to its citizens, there is much to be proud of. I, for one, am grateful to the EU that I have been able to live and work in the UK for the last 24 years; that my clients successfully do business across Europe without red-tape and can supply their customers in Nuremberg with the same ease as they are supplying customers in Newcastle; that I hardly have to slow down when I drive across European borders, even into Switzerland; and that a hundredweight of different currencies has been removed from my travel wallet and replaced by the euro. Women and workers should be eternally grateful to the EU for having dragged UK equality laws kicking and screaming into the 21st century, and we all should be grateful for it having cleaned up our environment, to pick just a few examples. And while there is still a deficit in accountability, how fantastic is it that there is a parliament with democratically elected members from across Europe, debating the continent’s common future?

Maybe the whole EU thing is a bit like a children’s playground: if you are the kid standing by and sniping from the side lines, you’re not going to have as good a time as if you are the kid who is right in the thick of it and making the best of what’s going, even if you don’t necessarily always want to play the games the other kids are into right now. So go on Britain, while there can be no argument that the EU does indeed need a healthy dose of reform, go on, lead from the front and stay with it, even if Brit-In doesn’t roll off the tongue quite as neatly as Brexit. Yes, you can!