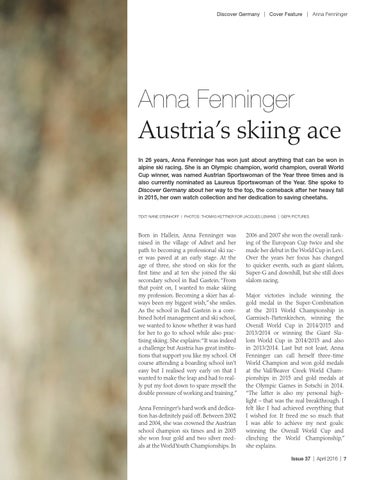 Anna Fenninger Austria’s skiing ace In 26 years, Anna Fenninger has won just about anything that can be won in alpine ski racing. She is an Olympic champion, world champion, overall World Cup winner, was named Austrian Sportswoman of the Year three times and is also currently nominated as Laureus Sportswoman of the Year. She spoke to Discover Germany about her way to the top, the comeback after her heavy fall in 2015, her own watch collection and her dedication to saving cheetahs. TEXT: NANE STEINHOFF I PHOTOS: THOMAS KETTNER FOR JACQUES LEMANS | GEPA PICTURES

Born in Hallein, Anna Fenninger was raised in the village of Adnet and her path to becoming a professional ski racer was paved at an early stage. At the age of three, she stood on skis for the first time and at ten she joined the ski secondary school in Bad Gastein. “From that point on, I wanted to make skiing my profession. Becoming a skier has always been my biggest wish,” she smiles. As the school in Bad Gastein is a combined hotel management and ski school, we wanted to know whether it was hard for her to go to school while also practising skiing. She explains: “It was indeed a challenge but Austria has great institutions that support you like my school. Of course attending a boarding school isn’t easy but I realised very early on that I wanted to make the leap and had to really put my foot down to spare myself the double pressure of working and training.” Anna Fenninger’s hard work and dedication has definitely paid off. Between 2002 and 2004, she was crowned the Austrian school champion six times and in 2005 she won four gold and two silver medals at the World Youth Championships. In

2006 and 2007 she won the overall ranking of the European Cup twice and she made her debut in the World Cup in Levi. Over the years her focus has changed to quicker events, such as giant slalom, Super-G and downhill, but she still does slalom racing. Major victories include winning the gold medal in the Super-Combination at the 2011 World Championship in Garmisch-Partenkirchen, winning the Overall World Cup in 2014/2015 and 2013/2014 or winning the Giant Slalom World Cup in 2014/2015 and also in 2013/2014. Last but not least, Anna Fenninger can call herself three-time World Champion and won gold medals at the Vail/Beaver Creek World Championships in 2015 and gold medals at the Olympic Games in Sotschi in 2014. “The latter is also my personal highlight – that was the real breakthrough. I felt like I had achieved everything that I wished for. It freed me so much that I was able to achieve my next goals: winning the Overall World Cup and clinching the World Championship,” she explains. Issue 37 | April 2016 | 7