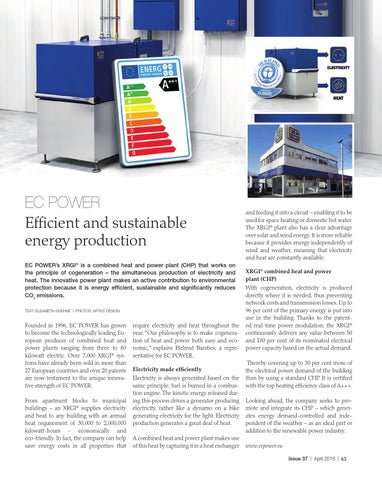 EC POWER Efficient and sustainable energy production EC POWER’s XRGI® is a combined heat and power plant (CHP) that works on the principle of cogeneration – the simultaneous production of electricity and heat. The innovative power plant makes an active contribution to environmental protection because it is energy efficient, sustainable and significantly reduces CO2 emissions. TEXT: ELISABETH DOEHNE I PHOTOS: ARTIST DESIGN

Founded in 1996, EC POWER has grown to become the technologically leading European producer of combined heat and power plants ranging from three to 80 kilowatt electric. Over 7,000 XRGI® systems have already been sold in more than 27 European countries and over 20 patents are now testament to the unique innovative strength of EC POWER. From apartment blocks to municipal buildings – an XRGI® supplies electricity and heat to any building with an annual heat requirement of 30,000 to 2,000,000 kilowatt-hours – economically and eco-friendly. In fact, the company can help save energy costs in all properties that

require electricity and heat throughout the year. “Our philosophy is to make cogeneration of heat and power both easy and economic,” explains Helmut Barsties, a representative for EC POWER. Electricity made efficiently Electricity is always generated based on the same principle: fuel is burned in a combustion engine. The kinetic energy released during this process drives a generator producing electricity, rather like a dynamo on a bike generating electricity for the light. Electricity production generates a great deal of heat. A combined heat and power plant makes use of this heat by capturing it in a heat exchanger

and feeding it into a circuit – enabling it to be used for space heating or domestic hot water. The XRGI® plant also has a clear advantage over solar and wind energy. It is more reliable because it provides energy independently of wind and weather, meaning that electricity and heat are constantly available. XRGI® combined heat and power plant (CHP) With cogeneration, electricity is produced directly where it is needed, thus preventing network costs and transmission losses. Up to 96 per cent of the primary energy is put into use in the building. Thanks to the patented real-time power modulation, the XRGI® continuously delivers any value between 50 and 100 per cent of its nominated electrical power capacity based on the actual demand. Thereby covering up to 30 per cent more of the electrical power demand of the building than by using a standard CHP. It is certified with the top heating efficiency class of A+++. Looking ahead, the company seeks to promote and integrate its CHP – which generates energy demand-controlled and independent of the weather – as an ideal part or addition to the renewable power industry. www.ecpower.eu Issue 37 | April 2016 | 63