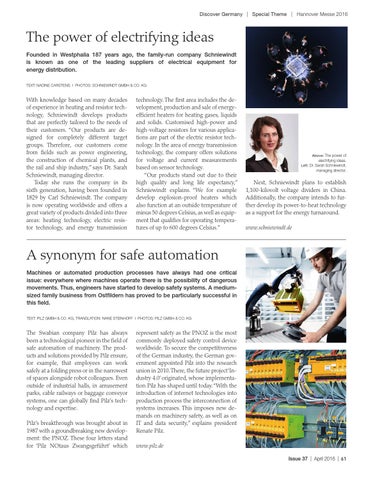 The power of electrifying ideas Founded in Westphalia 187 years ago, the family-run company Schniewindt is known as one of the leading suppliers of electrical equipment for energy distribution. TEXT: NADINE CARSTENS I PHOTOS: SCHNIEWINDT GMBH & CO. KG

With knowledge based on many decades of experience in heating and resistor technology, Schniewindt develops products that are perfectly tailored to the needs of their customers. “Our products are designed for completely different target groups. Therefore, our customers come from fields such as power engineering, the construction of chemical plants, and the rail and ship industry,” says Dr. Sarah Schniewindt, managing director. Today she runs the company in its sixth generation, having been founded in 1829 by Carl Schniewindt. The company is now operating worldwide and offers a great variety of products divided into three areas: heating technology, electric resistor technology, and energy transmission

technology. The first area includes the development, production and sale of energyefficient heaters for heating gases, liquids and solids. Customised high-power and high-voltage resistors for various applications are part of the electric resistor technology. In the area of energy transmission technology, the company offers solutions for voltage and current measurements based on sensor technology. “Our products stand out due to their high quality and long life expectancy,” Schniewindt explains. “We for example develop explosion-proof heaters which also function at an outside temperature of minus 50 degrees Celsius, as well as equipment that qualifies for operating temperatures of up to 600 degrees Celsius.”

Next, Schniewindt plans to establish 1,100-kilovolt voltage dividers in China. Additionally, the company intends to further develop its power-to-heat technology as a support for the energy turnaround. www.schniewindt.de

A synonym for safe automation Machines or automated production processes have always had one critical issue: everywhere where machines operate there is the possibility of dangerous movements. Thus, engineers have started to develop safety systems. A mediumsized family business from Ostfildern has proved to be particularly successful in this field. TEXT: PILZ GMBH & CO. KG, TRANSLATION: NANE STEINHOFF I PHOTOS: PILZ GMBH & CO. KG

The Swabian company Pilz has always been a technological pioneer in the field of safe automation of machinery. The products and solutions provided by Pilz ensure, for example, that employees can work safely at a folding press or in the narrowest of spaces alongside robot colleagues. Even outside of industrial halls, in amusement parks, cable railways or baggage conveyor systems, one can globally find Pilz’s technology and expertise. Pilz’s breakthrough was brought about in 1987 with a groundbreaking new development: the PNOZ. These four letters stand for ‘Pilz NOtaus Zwangsgeführt’ which

represent safety as the PNOZ is the most commonly deployed safety control device worldwide. To secure the competitiveness of the German industry, the German government appointed Pilz into the research union in 2010. There, the future project ‘Industry 4.0’ originated, whose implementation Pilz has shaped until today. “With the introduction of internet technologies into production process the interconnection of systems increases. This imposes new demands on machinery safety, as well as on IT and data security,” explains president Renate Pilz. www.pilz.de Issue 37 | April 2016 | 61