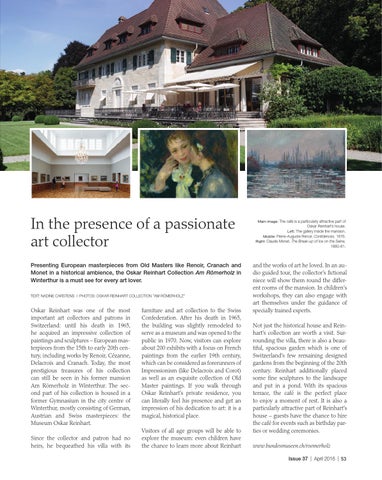 In the presence of a passionate art collector Presenting European masterpieces from Old Masters like Renoir, Cranach and Monet in a historical ambience, the Oskar Reinhart Collection Am Römerholz in Winterthur is a must see for every art lover. TEXT: NADINE CARSTENS I PHOTOS: OSKAR REINHART COLLECTION “AM RÖMERHOLZ”

Oskar Reinhart was one of the most important art collectors and patrons in Switzerland: until his death in 1965, he acquired an impressive collection of paintings and sculptures – European masterpieces from the 15th to early 20th century, including works by Renoir, Cézanne, Delacroix and Cranach. Today, the most prestigious treasures of his collection can still be seen in his former mansion Am Römerholz in Winterthur. The second part of his collection is housed in a former Gymnasium in the city centre of Winterthur, mostly consisting of German, Austrian and Swiss masterpieces: the Museum Oskar Reinhart. Since the collector and patron had no heirs, he bequeathed his villa with its

furniture and art collection to the Swiss Confederation. After his death in 1965, the building was slightly remodeled to serve as a museum and was opened to the public in 1970. Now, visitors can explore about 200 exhibits with a focus on French paintings from the earlier 19th century, which can be considered as forerunners of Impressionism (like Delacroix and Corot) as well as an exquisite collection of Old Master paintings. If you walk through Oskar Reinhart’s private residence, you can literally feel his presence and get an impression of his dedication to art: it is a magical, historical place. Visitors of all age groups will be able to explore the museum: even children have the chance to learn more about Reinhart

Main image: The café is a particularly attractive part of Oskar Reinhart’s house. Left: The gallery inside the mansion. Middle: Pierre-Auguste Renoir, Confidences, 1876. Right: Claude Monet, The Break-up of Ice on the Seine, 1880-81.

and the works of art he loved. In an audio guided tour, the collector’s fictional niece will show them round the different rooms of the mansion. In children’s workshops, they can also engage with art themselves under the guidance of specially trained experts. Not just the historical house and Reinhart’s collection are worth a visit. Surrounding the villa, there is also a beautiful, spacious garden which is one of Switzerland’s few remaining designed gardens from the beginning of the 20th century. Reinhart additionally placed some fine sculptures to the landscape and put in a pond. With its spacious terrace, the café is the perfect place to enjoy a moment of rest. It is also a particularly attractive part of Reinhart’s house – guests have the chance to hire the café for events such as birthday parties or wedding ceremonies. www.bundesmuseen.ch/roemerholz Issue 37 | April 2016 | 53