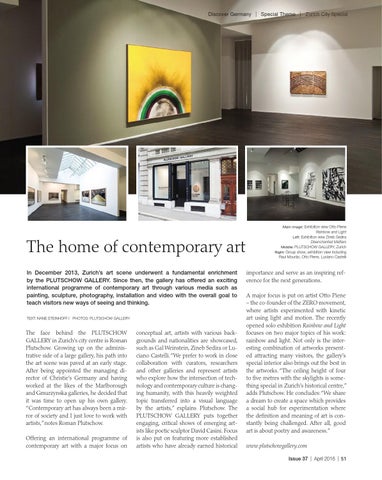 The home of contemporary art In December 2013, Zurich’s art scene underwent a fundamental enrichment by the PLUTSCHOW GALLERY. Since then, the gallery has offered an exciting international programme of contemporary art through various media such as painting, sculpture, photography, installation and video with the overall goal to teach visitors new ways of seeing and thinking. TEXT: NANE STEINHOFF I PHOTOS: PLUTSCHOW GALLERY

The face behind the PLUTSCHOW GALLERY in Zurich’s city centre is Roman Plutschow. Growing up on the administrative side of a large gallery, his path into the art scene was paved at an early stage. After being appointed the managing director of Christie’s Germany and having worked at the likes of the Marlborough and Gmurzynska galleries, he decided that it was time to open up his own gallery. “Contemporary art has always been a mirror of society and I just love to work with artists,” notes Roman Plutschow. Offering an international programme of contemporary art with a major focus on

conceptual art, artists with various backgrounds and nationalities are showcased, such as Gal Weinstein, Zineb Sedira or Luciano Castelli. “We prefer to work in close collaboration with curators, researchers and other galleries and represent artists who explore how the intersection of technology and contemporary culture is changing humanity, with this heavily weighted topic transferred into a visual language by the artists,” explains Plutschow. The PLUTSCHOW GALLERY puts together engaging, critical shows of emerging artists like poetic sculptor David Casini. Focus is also put on featuring more established artists who have already earned historical

importance and serve as an inspiring reference for the next generations. A major focus is put on artist Otto Piene – the co-founder of the ZERO movement, where artists experimented with kinetic art using light and motion. The recently opened solo exhibition Rainbow and Light focuses on two major topics of his work: rainbow and light. Not only is the interesting combination of artworks presented attracting many visitors, the gallery’s special interior also brings out the best in the artworks. “The ceiling height of four to five metres with the skylights is something special in Zurich’s historical centre,” adds Plutschow. He concludes: “We share a dream to create a space which provides a social hub for experimentation where the definition and meaning of art is constantly being challenged. After all, good art is about poetry and awareness.” www.plutschowgallery.com Issue 37 | April 2016 | 51