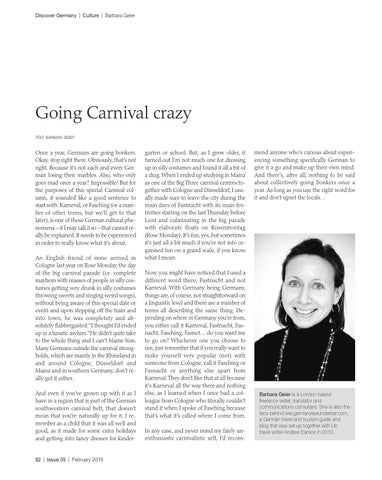 Once a year, Germans are going bonkers. Okay, stop right there. Obviously, that’s not right. Because it’s not each and every German losing their marbles. Also, who only goes mad once a year? Impossible! But for the purposes of this special Carnival column, it sounded like a good sentence to start with. Karneval, or Fasching (or a number of other terms, but we’ll get to that later), is one of those German cultural phenomena – if I may call it so – that cannot really be explained. It needs to be experienced in order to really know what it’s about. An English friend of mine arrived in Cologne last year on Rose Monday, the day of the big carnival parade (i.e. complete mayhem with masses of people in silly costumes getting very drunk in silly costumes throwing sweets and singing weird songs), without being aware of this special date or event and upon stepping off the train and into town, he was completely and absolutely flabbergasted:“I thought I’d ended up in a lunatic asylum.”He didn’t quite take to the whole thing and I can’t blame him. Many Germans outside the carnival strongholds, which are mainly in the Rhineland in and around Cologne, Düsseldorf and Mainz and in southern Germany, don’t really get it either. And even if you’ve grown up with it as I have in a region that is part of the German southwestern carnival belt, that doesn’t mean that you’re naturally up for it. I remember as a child that it was all well and good, as it made for some extra holidays and getting into fancy dresses for kinder-

garten or school. But, as I grew older, it turned out I’m not much one for dressing up in silly costumes and found it all a bit of a drag. When I ended up studying in Mainz as one of the Big Three carnival centres together with Cologne and Düsseldorf, I usually made sure to leave the city during the main days of Fastnacht with its main festivities starting on the last Thursday before Lent and culminating in the big parade with elaborate floats on Rosenmontag (Rose Monday). It’s fun, yes, but sometimes it’s just all a bit much if you’re not into organised fun on a grand scale, if you know what I mean. Now, you might have noticed that I used a different word there, Fastnacht and not Karneval. With Germany being Germany, things are, of course, not straightforward on a linguistic level and there are a number of terms all describing the same thing. Depending on where in Germany you’re from, you either call it Karneval, Fastnacht, Fasnacht, Fasching, Fasnet… do you want me to go on? Whichever one you choose to use, just remember that if you really want to make yourself very popular (not) with someone from Cologne, call it Fasching or Fasnacht or anything else apart from Karneval.They don’t like that at all because it’s Karneval all the way there and nothing else, as I learned when I once had a colleague from Cologne who literally couldn’t stand it when I spoke of Fasching because that’s what it’s called where I come from. In any case, and never mind my fairly unenthusiastic carnivalistic self, I’d recom-

mend anyone who’s curious about experiencing something specifically German to give it a go and make up their own mind. And there’s, after all, nothing to be said about collectively going bonkers once a year. As long as you use the right word for it and don’t upset the locals…