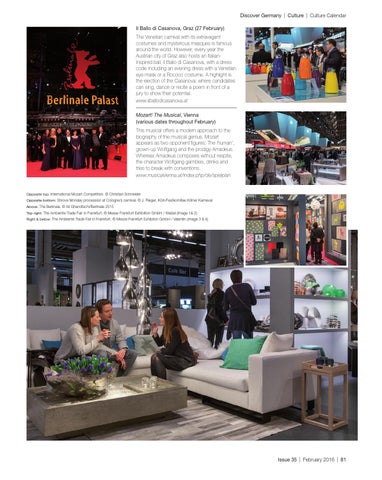 Discover Germany | Culture | Culture Calendar Il Ballo di Casanova, Graz (27 February) The Venetian carnival with its extravagant costumes and mysterious masques is famous around the world. However, every year the Austrian city of Graz also hosts an Italianinspired ball, Il Ballo di Casanova, with a dress code including an evening dress with a Venetian eye mask or a Rococo costume. A highlight is the election of the Casanova: where candidates can sing, dance or recite a poem in front of a jury to show their potential. www.ilballodicasanova.at Mozart! The Musical, Vienna (various dates throughout February) This musical offers a modern approach to the biography of the musical genius. Mozart appears as two opponent figures: The &#39;human&#39;, grown-up Wolfgang and the prodigy Amadeus. Whereas Amadeus composes without respite, the character Wolfgang gambles, drinks and tries to break with conventions. www.musicalvienna.at/index.php/de/spielplan