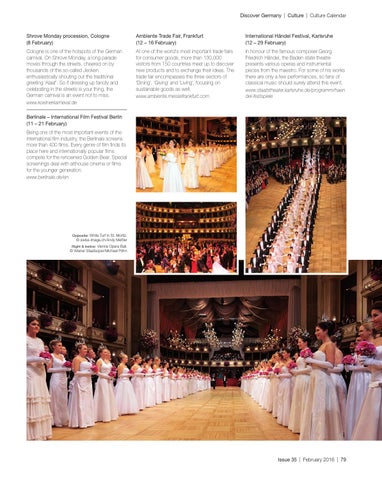 Cologne is one of the hotspots of the German carnival. On Shrove Monday, a long parade moves through the streets, cheered on by thousands of the so-called Jecken enthusiastically shouting out the traditional greeting ‘Alaaf’. So if dressing up fancily and celebrating in the streets is your thing, the German carnival is an event not to miss. www.koelnerkarneval.de

At one of the world&#39;s most important trade fairs for consumer goods, more than 130,000 visitors from 150 countries meet up to discover new products and to exchange their ideas. The trade fair encompasses the three sectors of &#39;Dining&#39;, &#39;Giving&#39; and &#39;Living&#39;, focusing on sustainable goods as well. www.ambiente.messefrankfurt.com

In honour of the famous composer Georg Friedrich Händel, the Baden state theatre presents various operas and instrumental pieces from the maestro. For some of his works there are only a few performances, so fans of classical music should surely attend this event. www.staatstheater.karlsruhe.de/programm/haen del-festspiele

Berlinale – International Film Festival Berlin (11 – 21 February) Being one of the most important events of the international film industry, the Berlinale screens more than 400 films. Every genre of film finds its place here and internationally popular films compete for the renowned Golden Bear. Special screenings deal with arthouse cinema or films for the younger generation. www.berlinale.de/en